1 Rimac Nevera Is Fighting for Grip at the Strip, Still Launches Like a Rocket

3 Tesla Plaid Jumps on the Dyno, Comes Off Undecided Even With Secret Mode Enabled

1963 Chevrolet Corvette Spent Most of Its Life in the Desert, Flaunts Bare Fiberglass Body

Tesla Model S Plaid vs Rimac Nevera Is the 3,000-HP Drag Race You've Been Waiting For

Dragos Chitulescu
This is it! One of the most anticipated drag races of the year. The Tesla Model S Plaid is finally going up against the Rimac Nevera. I've got my hunches on how this is about to go down, but what about you? Do you think there is any chance that the Tesla can stack up to the Croatian hypercar?
11 photos

We grew up with Lamborghinis, Ferraris, and Bugattis as our poster cars. But I get the feeling that kids that are just coming into the world will be dreaming about one day driving a car like the Rimac Nevera. And that seems perfectly natural. If you ever get into an argument about the future of electrification with someone, the Nevera serves as a good example against any naysayers. Everyone seems to be talking about it, and I feel that we're just barely scratching the surface.

It has only been a few days since the guys over at Dragtimes have confirmed what we all knew was going to happen. The Rimac Nevera is the quickest production car ever, as measured over the quarter-mile (402 meters). The 1,914-horsepower Croatian hypercar only needed 8.58 seconds to complete the run, and it did so with a trap speed of 167.51 mph (269.58 kph). To put that into perspective, a Bugatti Chiron Sport needs about 9.4 seconds to run the same distance.

Even for a car that's been prepared specifically for drag racing, doing 8.58-second runs is something to be proud of. And of course, the Nevera can do so much more than just drive in a straight line. The car we're looking at today is number 2 out of the 150 planned units. My old friend Miroslav Zrncevic is also around for the test, and he's probably driven the Nevera for more miles than anyone else. I still can't believe that he's moved on from drifting Skylines to being the test driver for the quickest production car on the planet!

Surprisingly enough, as soon as both cars start in the first run, it's the Tesla that jumps ahead. But it only takes about a second for the Rimac hypercar to move into 1st place. And from that point on, the gap just keeps getting bigger and bigger. We get to see the race from multiple angles, and it feels so strange only hearing the wind, with no crazy exhaust note. Looking at the scoreboard, the difference between the two cars is of about 0.62 seconds.

That may not sound like much if you're not familiar with quarter-mile drag racing, but I'd still call it a serious gap. For the second run, the Nevera takes control from the get-go, as it makes the Model S Plaid look slow in the process. The third run reveals the same outcome. You can't help but wonder how long it will take until another production vehicle will even come close to the Nevera. 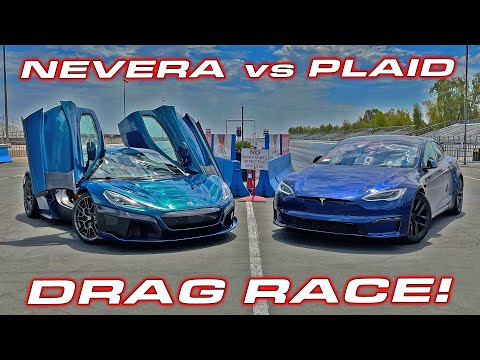