Can You Make the 2020 Toyota GR Supra's Fake Vents Functional?

Elon Musk has never been about lap times with his most famous Tesla, the Model S, but that is soon to change after a bunch of specially modified prototypes were spotted thrashing their bespoke tires on the Nurburgring Nordschleife.
29 photos

We already talked about a red car present on the Green Hell last week, and so did Elon, who also mentioned that the same prototype is the new record-holder for “fastest 4 door ever at Laguna Seca.”

Somewhat amusingly, it seems like the prototype wasn't necessarily gunning for a record, but was simply too fast during advanced R&D testing of the new Tesla Model S Plaid powertrain. Spaceballs fans will know that “Plaid” is the only thing faster than “Ludicrous” speed in the Universe.

The real news this week comes from our spy photographers based around the Nordschleife, who timed some of the laps of various Model S Plaid prototypes running around. Ahead of Wednesday's alleged record attempt, it seems like the fastest run was a 7:23 minutes lap time, which would make it almost 20 seconds faster than the Porsche Taycan.

It should be mentioned that the weather conditions were rather cool, with heavy clouds covering the circuit and the outside temperature was around 18 degrees Celsius.

Unlike the first red prototype, which was fitted with the sticky Michelin Cup 2 R, the new ones are fitted with Goodyear Eagle F1 Supersport RS rubber, which is a prototype tire that isn't yet available for retail.

If the official timed run from Wednesday evening isn't good enough for Tesla, there is talk about a second attempt on Saturday evening, but if these hand-timed test runs are any indication, we can call the Model S versus Taycan case closed regarding the Nurburgring.

What's interesting to note is the seven-seat package of the Tesla Model S doing runs on the Green Hell and apparently smashing track records. That said, there is more than one car as you can see in our spy videos and photo gallery, and there are three confirmed drivers for the prototypes, including a Swede who ironically drives a 911 GT3 Cup for Porsche Team Huber in the VLN series. 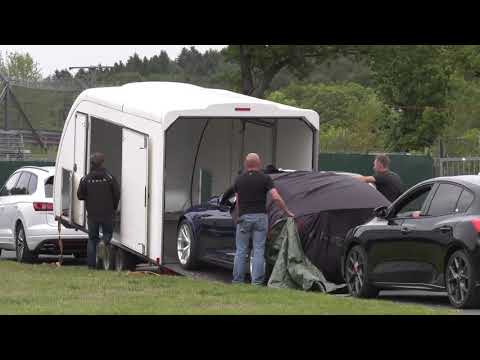