1 Drag Race of the Baggers Pits Indian vs. Harley, Runs Have Different Outcomes

Remember how your mother used to say you were too smart for your own good? Well, she might have been exaggerating a little, but saying the Tesla Model S Plaid is too quick for its own good is absolutely bang on.
11 photos

The latest and greatest from Elon Musk's company can accelerate quicker than any other production car currently on the market. We're not entirely sure where the Rimac Nevera fits in here, but since the Croatians do not dispute this claim, we won't do it for them. The Model S Plaid is so quick, in fact, that it will have no problem running the quarter-mile in well under 10 seconds.

That's great news for all those looking to take their new Teslas to the drag strip, except if they do, in most cases, they will have to keep the performance in check and stay just above the 10-second mark. Otherwise, they're likely to be asked one of the two: either fit their car and themselves with the required safety equipment or just leave.

That means running the Model S Plaid at the strip will require the driver to develop a whole new set of skills that are unlikely to come in handy under any other circumstances. They will have to learn to modulate the throttle to finish in as little more than 10 seconds as possible. Alternatively, they could just decide to make their $120K+ EV a pure drag racing machine and fit it with a roll cage and every other feature required by the NHRA and IHRA regulations.

Steven Thompson, the owner of this Model S Plaid, hasn't made the jump yet, but it would appear the owners of this drag strip were just happy to host the new Tesla since, he claims, they only asked him to "take it easy" after he ran a 9.3-second quarter-mile at 151 mph (243 kph). So, what did he do next?

He raced a full bolt-on Nissan GT-R, obviously. Recognizing the danger, Steven knew he would have to strike a balance between not making the drag strip administrator any madder but also making sure he would win. In the end, it looks like his desire to be victorious got the better of him as we dipped well under the 10-second mark with a time of 9.71 at 148 mph (238 kph).

It turns out he had been overly cautious as the Nissan GT-R only did a 10.79 at 132 mph (212 kph), but when you're racing in the Model S Plaid, the weight of the entire Tesla community rests on your shoulders. You don't want to be the first to feature in a clip where the Plaid loses. It is his channel, meaning he has complete control over what makes it online, but you never know who's lurking around with the camera rolling. 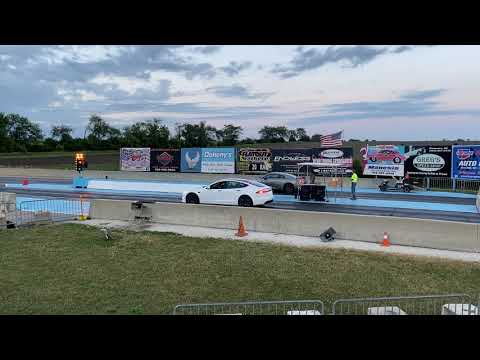