2 Nissan GT-R Nismo vs. Tesla Model 3 Drag Race Has a Clear Winner, Can You Guess It?

5 Watch the Tesla Model S Plaid Sprint from 60 to 130 MPH in Less Than 5 Seconds
Car video reviews:
Up Next

Tesla Model S Plaid Faces Tuned GT-R on a Drag Strip, You See Where This Is Going

It is a known fact that Tesla's Model S Plaid offers incredible acceleration with zero effort from the driver. And it remains road-legal and noise compliant while doing so, which is not something that can be said about vehicles that get tuned to be able to beat a Model S Plaid on the drag strip.
6 photos

According to Tesla, a Model S Plaid can do a 9.23-second quarter-mile run on a prepped track, with a one-foot rollout subtracted. The run ends at an impressive 155 mph (ca. 249 kph), which means that the Model S Plaid may be too quick in stock form for the rules of some drag strips.

It is worth noting that the performance mentioned above is achieved with a vehicle that costs almost $130,000, so it is not exactly affordable. However, it is affordable if you calculate horsepower per dollar, especially if you look at what other vehicles you can buy that can offer that much power in a special mode.

That is right. You do not have that many options today when it comes to getting a vehicle with four-figure horsepower for just under $130k at launch. With that in mind, you cannot help but wonder what would happen if another model that was known for supercar-beating performance at a reasonable price faces it on the drag strip.

You already know from the headline that we are referring to the R35 Nissan GT-R. As you can imagine, a stock model would not do here, and you are correct.

According to a commenter on YouTube, this example of the R35 GT-R has received mods that bumped its output to over 1,200 horsepower. We cannot verify that claim, but it does add up if you think about it.

When money is concerned, tuning a GT-R to over 1,000 horsepower will require a hefty sum, but you might still undercut a Tesla Model S Plaid if you go for a used GT-R and then throw a well-calculated recipe of aftermarket parts at it.

The result will be an incredibly quick Nissan GT-R, which will also sound great, and the latter is something that nobody will ever be able to say about a Model S Plaid. On the other hand, we have to admit that Tesla is blistering fast while also retaining its five-seat configuration, as well as having the ability to be a daily driver with no hassle. 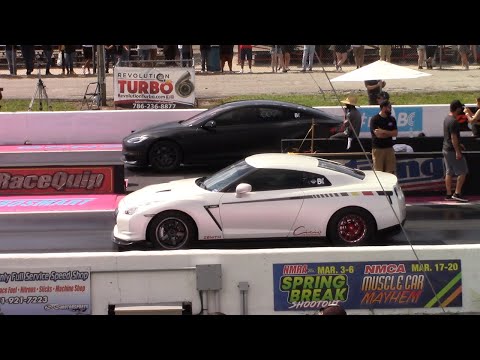