Dragos Chitulescu
Electric vehicles today are so fast that even supercar owners are going to think twice before challenging one to a race. We're not even going to talk about the Rimac Nevera, which seems to be invincible down the quarter-mile. The Nevera costs a fortune, to say the least, but the Tesla Model S Plaid is still extremely fast and quite affordable.
7 photos

Not everyone can spend upwards of $100,000 on a car, but it's not that expensive if you compare the Model S Plaid to Ferraris or Lamborghinis. We've seen Elon's newest street-going rocket race against some very fast cars this year. We're talking about cars like the Porsche Taycan Turbo S, the Lamborghini Aventador SVJ, a tuned Shelby GT500, a Dodge Demon, and of course, the Rimac Nevera.

What Tesla has achieved in its short history of fewer than two decades is nothing short of impressive. It has managed to go up against the industry giants and overtake them. How do you think people would have reacted 15 years ago if you would have told them that a Tesla vehicle would be capable of gapping Ferraris in the future? Even if the Ferrari SF90 Stradale is a ridiculously fast car, it can't possibly stand a chance against the Model S Plaid.

The Tesla only has three electric motors to play with, but those provide a total output of 1,020 horsepower and 1,050 lb-ft (1,420 Nm) of torque. Weighing in at 4,833 lbs (2,192 kg), that means it has 1 horsepower for every 4.73 lbs (2.14 kg). So mathematically speaking, you'd tend to think that the Ferrari might stand a chance down the quarter-mile (402 meters). For the first run, the Model S Plaid jumps the start, and even though it's first across the finish line, the Ferrari scores the first win.

The same situation happens on the second run as well. Even though the Tesla crosses the line in 9.36 seconds, with a trap speed of 150 mph (241 kph), it loses based on a technicality. Meanwhile, the Ferrari is about 0.3 seconds slower, but it's still leading the challenge 2 to 0 as of now. On the third run, the SF90 Stradale is off to an excellent start, as it takes the lead. But, by the time it shifts into 6th, the Model S Plaid makes its move and scores its first victory.

On the fourth run, the Tesla is in control from the get-go, and it makes its opponent look slow. It manages to get 9.3-second quarter-mile runs time after time, while the Ferrari is stuck at 9.59 seconds. With that being said, it's all down to the final run of the day, as they're tied 2 for 2. But the outcome is what we expected from the beginning. The Model S Plaid takes the win, but it was a close one, to say the least! 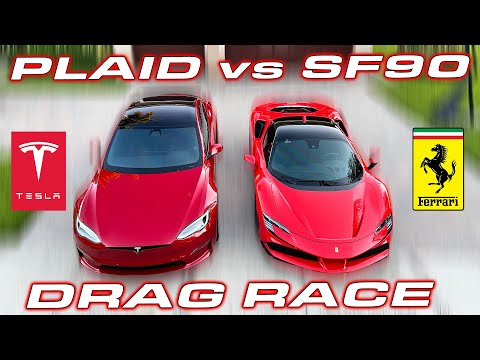