2 Tesla Model S Plaid Teardown Continues, Check Out This Analysis of Its Interior

3 Sandy Munro Shows Us What Makes the Tesla Model S Plaid Tick, What Makes It Tok

5 Tesla Tuner Offers Yoke Conversion That Turns It Into an Odd-Shaped Steering Wheel
Car video reviews:
Up Next

Sandy Munro and his team have continued their teardown process of the Tesla Model S Plaid. As they have already accustomed us, with each step, the team compares the Model S Plaid with previous versions of the Model S. The Plaid is more than just software, but rather a sum of small changes all around.
6 photos

Before we move forward, it is important to note that you should not try to replicate this teardown on your own. Sandy Munro and his team have many years of experience behind them, and taking apart a battery from an electric vehicle may be dangerous.

Even if the battery is not charged at all, it can still be a safety hazard. This warning also applies to hybrid cars. Just do your best to keep your hands from touching the metal components of the battery, it is that simple.

With that in mind, Sandy Munro puts on a protective face shield, and so does Ben Lindamood, an account director within Munro & Associates. Both examine the battery with great care, as there are several hazards here. Again, do not try to dismantle the battery of an electric vehicle if you have no training in this field.

As you may be aware, batteries can get hot, and that is why they have vents. They also have an active thermal management system, which is meant to keep them within a particular temperature range.

Some decisions made on this battery have led to Sandy Munro describing it as an engineering masterpiece. We are not going to ruin the video for you by describing what Sandy and his team are about to explain, but we can say that it is insightful.

After watching this video, along with the others in the Model S Plaid teardown series, you start to grasp why the American marque charges as much as it does for one of these vehicles.

The engineering behind this version is complex, and many components had to be redesigned almost from scratch, so they manage to fit in an existing platform, but offer an entirely new level of performance. 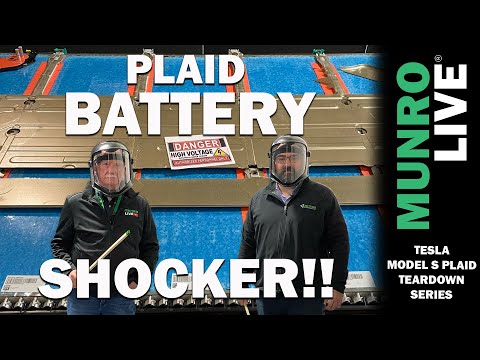