The quickness of Tesla cars is no secret anymore - in fact, with some help from media outlets and YouTube videos, it has become the stuff of modern urban folklore.
1 photo
Every kid who dreams of a Lamborghini knows that a Tesla Model S P100D would beat the Italian hypercar in a zero to 60 mph race. He would still fantasize about the wedge-shaped gas burner, but the electric sedan has definitely gained a spot in his heart as well.

The Tesla Model S has nothing left to prove in terms of acceleration, but just because it doesn't have to it doesn't mean that it won't. Especially in a situation such as this, where its sprightliness was put to very good use.

The man driving the Model S P85D in the very short video below is Jason Hughes. If you follow our Tesla news, you probably know who that is - he's the man who announced there was going to be a P100D model many months before it happened. He's also building a 1,000 hp electric car monster using two Tesla performance motors. Oh, and he just happens to have turned his house into a solar energy farm way before Elon Musk unveiled the Tesla solar shingles.

In other words, he's a Tesla fan, a hacker, and a very able engineer. Now we learn that he's also a very good and attentive driver as the extremely short video below demonstrates.

A lot of publications have presented this clip as proof that Tesla's phenomenal acceleration can be useful in other ways than trumping sports cars on the drag strip as well. While that's true, it only tells half of the story, and the less relevant one, we believe.

The real highlight here is the fact Hughes was paying attention to what was happening behind him and reacted quickly. Despite what Hughes is saying, judging by how quickly he moved his vehicle, we think any car on the road today would have managed to prevent the crash, so the Model S P85D's instant acceleration was a bit of overkill.

Looking at the markings on the road, it's clear to see the Toyota Prius would not have managed to stop in time. In fact, its driver even goes out of the road even though the car wasn't there anymore, which might be a testimony to the Tesla's teleporting ability.

Here is how Jason Hughes describes the incident: “This rear facing wide angle video doesn’t do the acceleration justice. Probably not many other cars out there that could have done this successfully. I was back up to nearly the speed limit (55 MPH) by just after the time this video cut off and by the time the Prius was nearly stopped in the space I was previously stopped.” 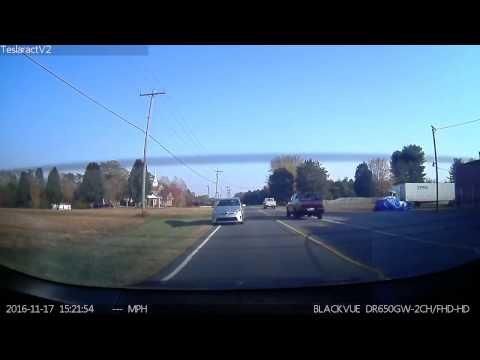