1 Can You Charge a Tesla Model S Through Footsteps? Apparently, Yes

4 2016 Tesla Model X Spotted in California, Looks Like a "Model S With a Pug Nose"

Fastest Charger Hellcat in the World Does 10.6 Quarter Mile, Driven by a Woman

Home > News > U-turn
Tudor Rus
Well, here's a drag race you don't see every day on YouTube channels: the Model S P85D flexing its electric muscles against the hardcore adrenaline-infusing track toy we know as the Caterham 620R.
1 photo
The drag race is not some impromptu battle between two random drivers, as Autocar orchestrated the mini-contest for an apparent reason: to see which vehicle is faster.

Now, the Caterham 620R is not a muscle car as those put to shame by the Model S in previously filmed brawls, but don't be quick to tag it as the underdog.

Power comes from a supercharged 2.0-liter Ford Duratec plant, which will battle the Model S' dual electric motors. We won't tell you how the fight ends, because you'll have to go through the whole video to see if internal combustion engines can hold the line for long in front of the fastly developing electric alternatives.

By the way, on which car would you bet your money before clicking play on the video below? 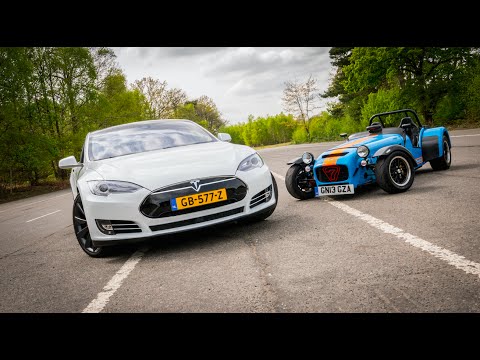