2 Tesla Model S is Just a Fancy Gadget, Not a Green Car

Home > News > Tuning
Gabriel Nica
Elon Musk must’ve known that people around the world will be taking their Teslas on the drag strip when he launched the P85D model. That thing is absolutely incredible, with acceleration numbers that do put to shame most cars out there.
1 photo
Only extremely expensive supercars can keep up with it up to 100 km/h (62 mph) or heavily tuned machines, such as this 800 HP GT-R. After all, the Tesla is not showing that performance just because it has all of its torque available at 1 RPM.

Just take a look at the figures the P85D brags with and you’ll understand why it’s such a rocket on the drag strip. The total output of the electric motors on board adds up to 691 HP and the torque goes up to 931 Nm (687 lb-ft).

Couple that with the all-wheel drive system on board and the weight of the EV doesn’t even matter anymore as the insane driving mode will propel it to 100 km/h (62 mph) in just 3.3 seconds.

However, the contender it’s going up against in the video below isn’t just any car. It’s a Nissan GT-R. In case you didn’t know, these things are renowned for one thing: straight-up acceleration. Quite a coincidence, huh?

In stock guise, the latest GT-R does the 0-100 km/h (62 mph) sprint in 2.8 seconds. Yes, that’s for the stock, 545 HP version thanks to its brilliant gearbox and all-wheel drive transmission. That’s on par with the Ludicrous mode for the updated Teslas and a mind-boggling number.

However, the one we’re looking at is a tuned 800 HP beast that has impressively better performance. For example, the 1/4 mile was done in 11.1 seconds with a trap speed of 132.5 mph (213.3 km/h). Is that maybe why the Tesla driver started a bit early? 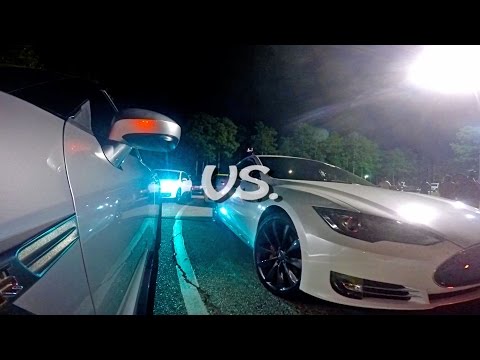