4 Ford Mustang Mach-E vs. Tesla Model Y: EV Rivals Are All About the Tech

Home > News > Spyshots
Vlad Mitrache
Last year - that would be 2020, better get used to it - Tesla announced through the voice of its CEO it would have three or even four important reveals to make throughout 2021, with one, in particular, being quite overdue.
10 photos

We're talking about the Model S refresh - call it a facelift, if you want. A vehicle launched all the way back in 2012 is quite a while ago by automotive industry standards. Granted, the electric sedan did receive a slight touch-up, particularly on its front fascia, in 2016, but despite holding up pretty well, there's still no getting around the fact it's reaching the end of its lifetime.

Well, everything Tesla said about the refresh suggests those who are expecting a major update in terms of visuals are set for a big disappointment. Now, a serendipitous encounter with a blue prototype near the company's headquarters in Palo Alto adds further fuel to that fire as it seems to follow more or less the same recipe.

The car wearing manufacturer plates was spotted by the front man of the YouTube channel "The Kilowatts". At first, he couldn't quite put his finger on what it seemed off about the EV, but he could instantly tell it wasn't just any regular Model S.

Sadly, the only front angle we have comes from the Tesla dashcam footage, and it's pretty low quality. However, after realizing he was probably onto something important, the man turned around and followed the prototype, managing to capture a few images with his phone (see gallery) as the Model S was making a left turn.

It's still unclear whether we're looking at the Model S refresh or the tri-motor Model S Plaid, but even though there are arguments on both sides, we're leaning toward the former. The YouTuber claims the prototype had a wider body, but to our eyes, that doesn't seem to be the case. It does, however, have a lowered suspension and a new air diffuser - two features that would come in handy on a performance vehicle - yet its wheels don't appear to be wide enough to cope with the torque presumably generated by the Plaid's powertrain. Plus, there's no rear wing.

If the car was indeed wider, then the Plaid explanation makes more sense. For the Europeans, the Model S is already a little too bulky, so extending the standard version even further would make it quite undesirable in that part of the world. As for the Plaid, that could just as well be the size of an aircraft carrier - if it will deliver the promised performance, nobody will care.

All things considered, we believe we're looking at a Model S refresh. The chrome delete is likely to be optional, but it's nice to see you can get it directly from the manufacturer. It's a great scoop from the guys at The Kilowatts, but we still don't get why they didn't try to get in front and snap a few pictures of the prototype's face as well. Maybe even follow it around some more and hope for a few interior pics, too. Maybe those would have shed a little more light on the matter.

Or maybe this is just Tesla's unconventional marketing at work. A completely uncamouflaged car trotting around the Palo Alto factory is practically asking for trouble. Somebody was bound to spot the unusual Model S and grab a few photos, subsequently sending the media into a frenzy.

Whatever the case, two things are very clear: one, we'll be seeing a lot more of this - and maybe others like it - prototype in the weeks to come; and two, the release of this thing, whatever it turns out to be, can't be too far away. As soon as more info becomes available, we'll let you know. 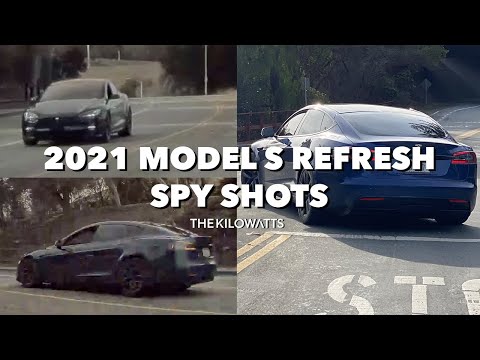