3 Tesla’s Advanced Autopilot Is So Good It Could Be Dangerous, Euro NCAP Finds

Even though skateboarding isn’t fashionable anymore, there are some people out there who keep the flame alight for the current and future generations. But even skateboarders think outside the box from time to time, which is why someone came up with the idea of using the door from a Tesla Model S for skating.
20 photos

“I told the guys I wanted a Tesla, so they got me... a door? Wow, thanks guys,” explains Aaron Kyro in the description of the Model S skateboarding video. “I wasn't sure it would skate, but we managed to get some pretty awesome tricks in on it. What should we skate next?”

As crazy as it sounds, attaching four axles and eight wheels to the rear door of an electric sedan is nothing unusual for the people at Braille Skateboarding. The driving force of the crew “is to show people all over the world the joy of skateboarding. We want people to see how fun skateboarding is and decide to start skating.”

On the other hand, don’t forget that uploading a video on YouTube with “Tesla” in the title is enough to attract the attention of thousands of people. On the other hand, Aaron has confirmed once again that he can turn anything into a skateboard.

The Model X P100D needs 2.9 seconds to hit 60 mph, whereas the Model 3 Dual Motor All-Wheel Drive does it in 3.3 seconds. If it’s driving range that interests you the most from Tesla, the Model S 100D wins this game of Top Trumps with an EPA-rated 335 miles.

Turning our attention back to Aaron, can you imagine the guy turning the Falcon-style rear door of the Model X into a skateboard as well?

Why yes that is a @teslamotors door we are skating. Thanks. If you have not seen today’s video go check it out now I think it’s electric  @fettypotter #pushskateboarding #braillearmy

Just when you think you have skated everything Elon Musk brings you a @teslamotors door L. Tomorrow’s video is going from 0-60 fast! #skater #elonmusk #tesla #pushskateboarding #braillearmy 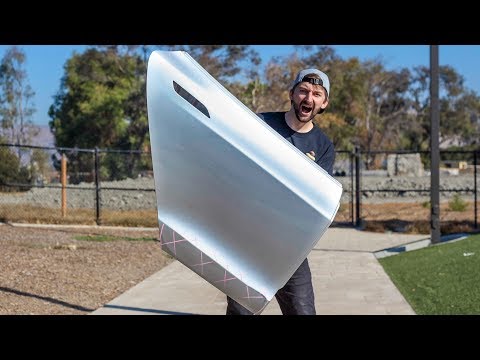