3 Fisker to Resume Production Only After A123 Sale Completes

5 Wanxiang’s Winning Bid for A123 Causes Concern for US Congress
Car video reviews:
Up Next

Set to introduce battery swapping for the Tesla Model S before the end of the year, EV automaker Tesla Motors demonstrated that the car’s battery pack can be changed in just 90 seconds.
1 photo
The demonstration took place last in Los Angeles, where the California-based company wanted to show that electric vehicles can get back on the road faster than their gasoline/diesel-powered counterparts. During the demo, Model S sedans were pulled over a hole in the stage and an automated machine disconnected the battery, removed it, and replaced it with a fully charged one.

Meanwhile, a video in the background showed a Tesla employee filling a gas-powered car at one of L.A.’s fastest gas station. While the first Tesla Model S was leaving the stage with a full battery, the fossil-fuel car was still waiting for its tank to be filled.

“I think it’s important for us to address the reasons people are not buying electrice cars. People need to feel they have the same level of freedom they have with gasoline cars. If they need to get somewhere in a hurry, they can do that. In fact, they can get there faster,” said Elon Musk.

Battery-swapping will become available by the end of the year in California, with the Boston - Washington D.C. corridor to follow. 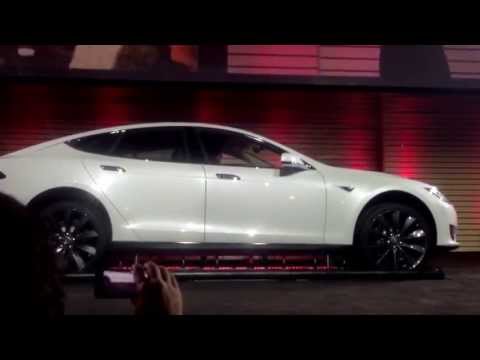