1 Jaguar I-Pace Can Pollute More Than a Diesel BMW X5, Review Points Out

4 Hyundai Kona Electric Does 0 to 100 KPH in 7.1 Seconds in Acceleration Test

Electric cars were supposed to be good for the environment, but like all expensive toys, they are seriously over-tuned so that the rich people who buy them get bragging rights. Today, we're going to look at the Tesla Model S, which has been slaying gas-powered cars for six years now. Its adversary is the Kia Stinger GT, which doesn't stand a chance.
2 photos

Kia doesn't make that many cars that can be described as "fast," but the Stinger is its halo. Using a Genesis platform, the Koreans crafted a four-door coupe. And with a turbocharged 3.3-liter V6, the top model is certainly fast enough for German base saloons. However, we are dealing with a base Tesla instead.

The 75D is the least powerful Model S you can buy. It's more expensive than the Stinger GT, sure, but not by a factor large enough to discredit the race. The rear-wheel-drive stinger puts down 370 horsepower in European spec, which is less than 1% more than the Stinger (365 vs. 362 bhp). Crucially, even though the Tesla is considerably heavier due to its battery pack, its torque output is about a third greater.

Before the race begins, Top Gear's numbers suggest each model might have its advantage. But if you look only at the 0 to 60 times and remember what Teslas have done in previous quarter-mile venues, you know this is a one-horse race.

While the twin turbos of the Stinger are spooling up, the Model S is ready to go. It launches with the ferocity of a hungry tiger and never lets go of the lead it secured. Judging from the fact that the Kia can't claw anything back, it would be the slowest car in a rolling race as well. Still, no other Kia would even be compared to a Tesla... except manybe the EVs. 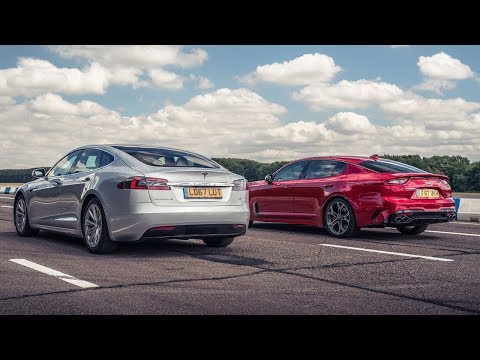