1 You Can No Longer Buy a Tesla With Bitcoin, So Maybe Dogecoin Is Next

James May bought a Model S 100D two years ago, and since then, the British presenter and journalist has enjoyed it a lot. But as it’s always the case with Tesla ownership, the electric sedan can be infuriating at times.
20 photos

Last year, the one and only Captain Slow listed a few things he dislikes about the Model S 100D, starting with the dodgy pop-out door handles. Other points of criticism include the car turning itself off, blaring trunk, weird font for the Model S badging on the trunk lid, and clonking rear suspension. Be that as it may, James loves the electric sedan, and he still owns it.

The latest niggle Captain Slow experienced with the Model S 100D is the 12-volt battery, which can go flat if the vehicle is left to charge for an extended period and the lithium-ion battery is fully charged. The 12-volt battery goes flat because it runs the car’s essential systems even while parked in the garage, and that presents a headache-inducing problem.

As fate would have it, James couldn’t open any of the doors, trunk, or frunk because the depleted battery powers them all. Opening the frunk proved to be a hassle in its own right because Captain Slow had to pull two emergency releases that are integrated into the front wheel arches.

Once the frunk is open, you have to remove not one, not two, but five (!!!) plastic panels to access the 12-volt battery. The final panel features very brittle clips, of which one has inevitably snapped even though James knows his way around a car. Captain Slow took an hour to dismantle the damn thing to connect the battery to a charger.

Considering that EVs are simpler than ICEs in every single way—which should translate into fewer ownership problems—I can’t blame poor the guy. 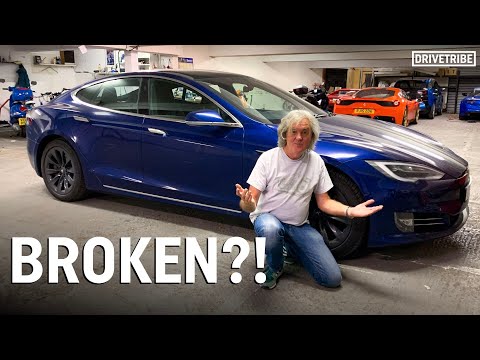