2 How Long Can an Electric Vehicle Keep You Warm in a Freezing Traffic Jam?

The new LFP batteries in the base version Tesla Model 3 RWD prove to be a winning formula, with great performance in the cold. Now, the same chemistry aces Bjorn Nyland’s 1,000 km (621 miles) challenge, completing the journey in ten hours and five minutes.
16 photos

We’ve already seen the new Lithium Iron Phosphate (LFP) batteries in the Tesla Model 3 RWD performing at the same level, if not better than the former NCA batteries. Although considered inferior in terms of energy density, they proved to be on the same level in terms of performance, especially in cold weather. In a previous test at low temperatures, a Tesla Model 3 with an LFP battery showed an impressive cold-weather range, especially considering it only has a 60 kWh battery.

The same car got into the hands of the famous Norwegian YouTuber Bjorn Nyland, who decided to put the car through his 1,000 km challenge. The car is a Made in China (MIC) model, like many others that are sold in Europe. One thing that sets apart the LFP chemistry is Tesla’s recommendation to fully charge the battery on a regular basis. This provides an extra range compared to the NCA battery that is not recommended to be charged to 100% unless really necessary.

Bjorn was impressed with Tesla Model 3 RWD’s performance, especially as the challenge was carried out at 2-4 degrees Celsius (around 35-40 degrees Fahrenheit). The trip was completed in 10 hours and five minutes, which is close to what the previous Model 3 SR+ with NCA battery achieved at much higher temperatures. For reference, the MIC Model 3 with an NCA battery completed the test in 9 hours and 55 minutes at 13-21 degrees Celsius (55-70 Fahrenheit). The same model, but this time one built in Fremont, needed 10 hours at 22-27 degrees Celsius (72-81 F) for the same trip.

There’s another big difference between those runs, though, and this could be of utmost importance for those who fancy buying a base-version Model 3. The LFP version of the car needed only five fast-charging stops, compared to six in the previous two tests. Bjorn Nyland notes the car has an outstanding thermal management system that helps with squeezing the last drop of energy even in cold temperatures. 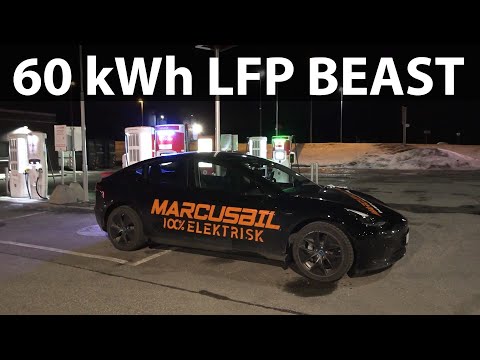