With all this talk about upcoming battery-powered models from established brands in the business that are going to take the fight to the Tesla Model 3, we keep forgetting about one that's already on the market: the Chevrolet Bolt/Opel Ampera-e.
1 photo
GM's electric hatchback has been a welcome surprise, and even though it's closing in on its second anniversary, it's still the closest you can get to a Model 3's range with its 238 miles. In fact, it offers 18 miles over the base Tesla version, which is the only one with a competitive price ($37,500 for the Bolt versus the $35,000 of the Model 3).

However, getting a base Model 3 right now is impossible, and it will continue to be until the end of this year in the U.S. and the start of 2019 for the rest of the world. Tesla is trying to raise its revenues, so it's keeping the more affordable option in the bag for now.

That means a buck-for-buck comparison between the two can't be made, but that doesn't mean people aren't curious to see how the two EVs stack up compared to each other right now, even if that means giving the Model 3 a slight advantage.

Judging by the way in which this impromptu drag race unfolds, even the base version of the Tesla has nothing to fear from GM's effort regarding its acceleration prowess. The Bolt doesn't have an official 0-60 mph time, so having it run alongside the Model 3 is actually a pretty good way of gauging its performance.

The Model 3 has an official figure of 4.6 seconds, but independent tests revealed it could be going slightly quicker than that. How much faster? Well, enough to give it a lead greater than one second over an unspecified distance.

The clip is shot in Minsk, the capital city of Belarus, which means the Bolt is actually an Opel Ampera-e - GM's European version of the electric hatch. Unlike its American sibling, the Europeans weren't as secretive, giving the Ampera-e a 0-62 mph (0-100 km/h) of 7.3 seconds.

Considering there couldn't be more than two seconds between the cars in the clip at the end, it means the measured distance was short enough to keep any of them from reaching 60 or 62 mph. Still, it gives us a nicely rounded idea of how that on-paper difference translates into the real world. And now, imagine the dual-motor performance version of the Model 3 instead (and ignore the fact it'll cost double the Bolt's $35,000). 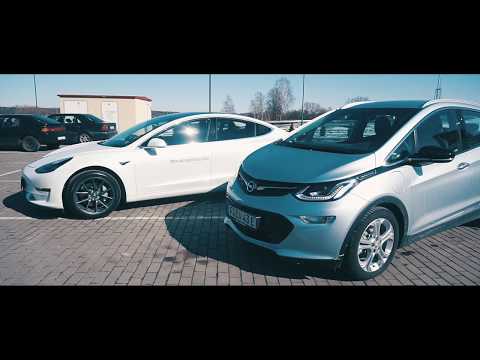