4 Is a Wrapped Tesla Model 3 the New Ultimate Flex for Gen-Z Car Buyers?

Home > News > Float and Dive
Stephen Rivers
During the winter months, as snow and rain literally descend upon much of the northern hemisphere, it's not unusual to see vehicles trying to ford more water than they probably should. Of course, sometimes, the results are totally shocking, like in this video of a Tesla Model 3 doing its best speed boat impersonation.
6 photos

As things start out, it doesn't look all that odd. The Tesla seems to be doing donuts in a fairly shallow amount of water. This isn't far afield from what thousands of drivers do each year when parking lots are a bit slicker. The lower traction allows for easier donuts.

What happens next is the truly shocking part. As the crowd seems to cheer the drive on, he (or she) decides to go straight for the middle of the pond(?). They hit such a deep patch of water that the entire car is engulfed in the resulting splash.

Once the water settles, the Tesla is still deep enough that water is clearly pouring over the hood and onto the windshield. The Model 3 just continues on, though and then as it exits the water and turns back to take another pass, we see something attached to the back of the vehicle.

Others have suggested that this might be some sort of propeller, but we think it's more likely some sort of winch. Perhaps pulling this Tesla out was the plan all along, and it just did better than expected.

In any case, this probably won't come as a shock to Elon Musk. He's publicly said that at least the Tesla Model S could be used as a "boat for short periods of time." According to Musk, the vehicle will float for quite some time and can be propelled via the wheels even when submerged. 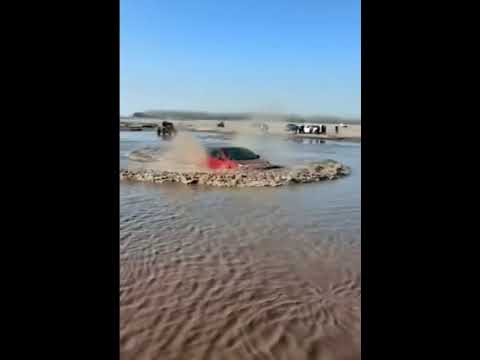