We all probably know some old driver who's clocked millions of miles and who says "we didn't have winter tires back in my day and we were just fine" - hell, you might even BE that guy. But just because it could be done without them, it doesn't mean it can't be done a lot better with them.
1 photo
Snow driving, that is. Believe it or not, there are still those who don't believe in the advantages brought by the use of winter tires, so it's actually a good thing that they've been made mandatory during the white season in several parts of the world. That's because there's nothing more frustrating than being crushed into by one of these know-it-all drivers.

With that out of the way, testing a car in winter conditions on summer tires - or all-weather tires, they're almost just as efficient in the snow - is about as useful as seeing if your laptop will float: that's a scenario that should never happen, so why bother?

Well, you shouldn't, but we're glad these guys did. The video starts with them driving toward an abandoned lot during a bit of a snowstorm, which is when they confess to using the stock Continental all-weather tires. They do say they'll buy winter tires for the Tesla Model 3, which is very sensible of them, but for now, the Contis are all that's keeping them from slipping into those guard rails - or worse.

The best bit, though, is when they do get to their destination and they start messing around with the EV. Thanks to the slippery nature of the tires, we can clearly see the traction control system at work - the same one that helps the Model S P100D shoot off the line so effectively.

Here, it simply cuts the power to the spinning wheel to allow it to gain traction once again. It's nothing special, but it just seems to be that much more effective on an EV than on regular ICE cars. Of course, you won't be able to use the car's entire power, but then again you wouldn't have been even if the system were deactivated, so at least this way it's all done in a more controlled manner.

But since you asked, they also enable the "slip start" function for a bit of fun. After all, you can't leave a vast area covered in snow without a few drifts and some donuts. The difference between the standard mode and with the "slip start" activated is obvious, but even if the Model 3 feels very safe on all-weather tires, you should bear in mind there is no substitute for grip when it comes to braking, so winter tires can be worth their weight in gold. 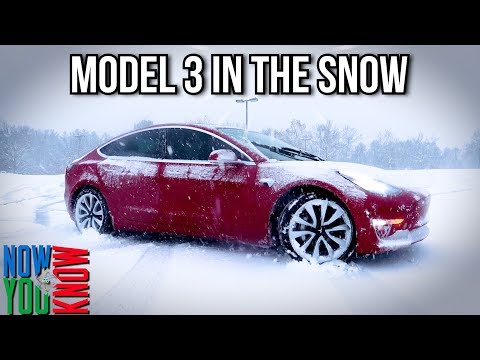