The Tesla Model 3, especially when equipped with the Track Pack (now at V.2), is proving to be quite capable of holding its own on a racing circuit. It's not scared of anything - from the Laguna Seca to the infamous Nürburgring and everything in between.
21 photos

Lap the Model 3 too many times, though, and you will notice a drop in performance. As the battery pack gets hotter and hotter, the vehicle decides the driver can't be trusted to use the power responsibly, so it limits the amount available of its own will. That's hardly ideal when you're in the middle of an on-track duel with an ICE car and you have a point to make, but it is what it is.

The Porsche Taycan, be it the 4S or the Turbo S version, doesn't seem to have that problem. Granted, while it may not limit power, it should run out of it altogether a lot sooner than the Model 3 due to the limited range (more on that later), but while it's still going, it'll offer a more consistent level of performance compared to the Tesla.

That performance, though, won't be enough to put any sort of distance between the German and American EVs, as this clip shot on the Nürburgring demonstrates. Reading the description of the video, we learn that the two cars have drivers with similar abilities, so that can't be counted as one of the deciding factors.

One that can, though, is the tires the two electric sedans use. The Tesla has Michelins Pilot Sport 4S, while the Taycan is equipped with a set of Hankooks. However, the Tesla driver says the two cars are pretty evenly matched and given their experience on the 'Ring and with racing cars in general, who are we to doubt it? The Model 3 is supposedly offering slightly superior performance on a cool battery pack, but things tend to even out after the first lap on the demanding circuit.

Another interesting aspect that's worth noticing has to do with what we said about the Taycan's range earlier. The short distance it can travel between charges has been one of the main criticism raised at Porsche's EV, but this side-by-side track experience showed something equally surprising and important: driven with this intensity, the Taycan will travel just as far as the Model 3, if not even further. The author says both cars started with 95% battery SOC and, after two laps, the Taycan's read 56% while Tesla's showed 53%. Interesting. 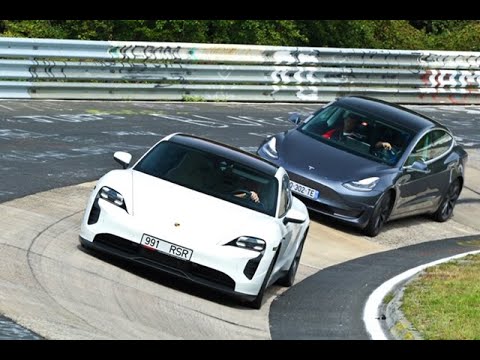