Home > News > Car Profile
Mihnea Radu
What has quattro and is tiny? The Audi TT. Actually, this is the 2019 model with the same 245 horsepower engine you get in the Golf GTI plus the added benefit of AWD.
2 photos

Not that it makes much of a difference; that much power and torque barely overwhelmed the front wheels. But it's good to try and make things fair, since one of the Teslas seen here has two freaking motors. That should be illegal in drag races. One motor per car please, otherwise it's cheating.

America has been gobbling up all the Model 3's it can get. This car is a phenomenon and has begun making its way into European hands. Tuners have already started developing body kits. Unless we're mistaken, one of these cars is the first in Germany to be fitted with adjustable KW suspension.

It's worth pointing out that the TT is the least powerful model here. Your basic rear-drive Model 3 is pushing out 286 HP in European spec and reaches 100 km/h in 5.1 seconds, while the TT takes 5.2s (official specs).

Ignore the numbers flashing on the screen, as the acceleration of the TT quattro is off. This is backed up by the race itself, where the Audi keeps its second-place from start to finish.

With a dual-motor setup pushing the same 450 HP as the Audi RS4, the Model 3 Performance is noticeably quicker and finishes the quarter-mile race with an 11.79-second time, over one and a half seconds faster than the Audi.

Speaking of which, we expect to see a lot more of these races in the future. Europe has a variety of smaller performance cars and the 300 horsepower hot hatches seem like good competition. There's also a variety of electric SUVs that are coming out, not to mention the hot diesel models. V8-powered Audi SQ7 versus green Tesla EV - doesn't that sound like a good race? 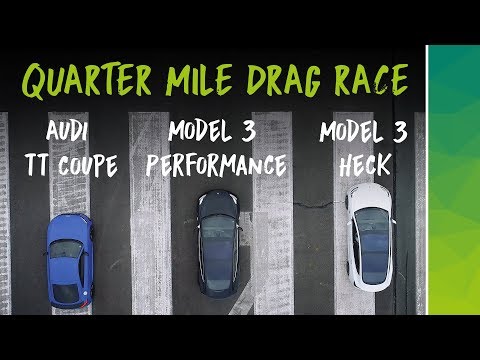