1 Tesla Is Convicted for Fraud Against Customer in China, Will Pay RMB1.5 Million

With the Tesla Model S Plaid stealing all the headlines lately thanks to its Nürburgring shenanigans, it's easy to forget that, save for the massively inferior power output, the Model 3 Performance actually makes for a much better track car than the S.
10 photos

The smaller, lighter, and nimbler electric sedan has proven its mettle at the Pikes Peak International Hill Climb recently. Whether we're talking about Unplugged Performance's heroics last year or this year's appearance of the very car you're about to see (albeit in completely different circumstances), everybody knows the Model 3 can hold its own on a racetrack. But there's a catch.

It needs serious modifications for that. Don't take this as proof of Tesla's inability to make good cars since you could say the same about any other manufacturer. After all, these are vehicles designed for regular use on public roads, not running at full capacity for minutes on end.

To go through the full list of modifications the Model 3 went through would simply take too long, so we'll just focus on the most important ones instead. The interior has been completely stripped out, receiving a roll cage instead. The only piece standing is the central display, but other than that - the rest of the dashboard included - it's all gone, replaced either by carbon fiber pieces or nothing at all.

The roof and rear window have both been replaced by carbon fiber, as have the now non-functional rear doors. The result is a weight drop of roughly 400 lbs (181 kg), enough to bring the Model 3 to a much more reasonable 3,800 lbs (1,723 kg). Still heavy by race car standards, but for an EV.

The front splitter needs no introductions since it pretty much defines the car's appearance from that angle, but the really cool bit (both figuratively and literally) is the big radiator mounted where the frunk used to be. It's used to cool down the battery, giving the Tesla about ten extra minutes or so of full performance before the inevitable happens and the battery overheats. However, since it lets air under the EV's hood, a side effect of its existence is to give the Model 3 a more ICE-like appearance.

The car was taken up Pikes Peak by legendary driver Daijiro Yoshihara (Dai), and the Japanese maestro is also present for the EV's trip to the Tire Slayer studios. Once a car gets there, everyone knows what to expect next: drifting. Well, since it's such a tight space, it's more like concentrated drifting, also known as donuts.

Dai, a former Formula DRIFT champion, is probably the perfect man to try and spin the EV, but the Model 3 proves to be extremely stubborn. The 305 Toyo R888R tires definitely don't help. Dai isn't the kind to give up easily but, in the end, despite his best efforts, we're forced to settle for very little. Well, even if there wasn't much drifting to be seen, the fact there was no engine sound sure made it creepy yet interesting to watch. 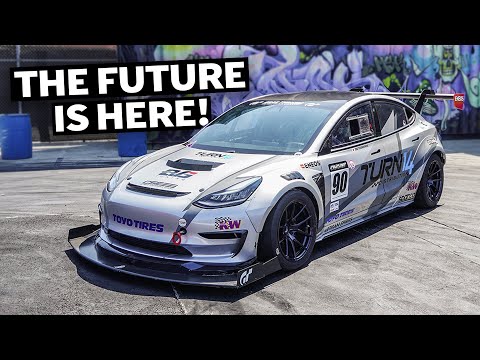