Armored Humvee M1151A1 Is One Machine Gun Away From Deploying Freedom

Some people don’t like the M340i xDrive. The most prevalent argument is that BMW M Performance cars play second fiddle to M cars with proper M engines, and I won’t deny that. But on the other hand, the M340i xDrive is a better daily driver than the M3 and its tuning potential is pretty huge.
9 photos

The G20 in M340i xDrive format is rocking the B58 straight-six turbo with 382 horsepower and 369 pound-feet (500 Nm) of torque from 1,800 through 5,000 revolutions per minute, figures that are properly adequate for a D-segment premium sedan. A well-sorted automatic transmission also needs to be highlighted, along with BMW’s very clever all-wheel-drive system.

The white-painted sedan in the featured video is a Stage 2 example with a downpipe and some visual upgrades over the stock car. Sam CarLegion quotes 520 horsepower and 490 pound-feet (664 Nm) of torque in a 3,968-lb (1,800-kg) package, which makes it properly quick on the quarter mile.

Quicker than a Tesla Model 3 Performance, that is. Pictured in what appears to be a blue wrap, the M3P further benefits from P O S E I D O N lettering on the rear trunk lid and white-painted wheels featuring a ten-spoke motif.

“Chintzy” is the word that comes to mind, but nevertheless, it’s understandable why someone that owns an M3P would change the car’s look. Tesla currently offers very few exterior design options for the Model 3, consisting of five paint options for the Performance variant. Priced from $58,990 excluding taxes and potential savings, the go-faster electric sedan is much obliged to hit 60 mph (97 kph) in 3.1 seconds in ideal conditions.

Even in relatively good conditions, the M3P in Sam CarLegion’s video digs in a little worse than the M340i xDrive. The Bimmer has the longer legs on the quarter mile in sport mode in both automatic and manual shift modes. Even with the traction control disengaged, the German car makes easy work of the Model 3 Performance. Had it been stock, though, the BMW M340i xDrive would've left the runway with its proverbial tail between its legs. 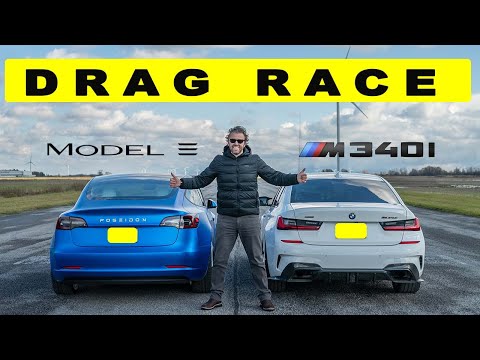