In terms of competitors, the Tesla Model 3 has only one that’s worth considering if you’re in the market for an electric sedan in this segment. As the headline implies, the culprit is the Polestar 2 produced in People's Republic of China on the same vehicle architecture as the Volvo XC40.
53 photos

If you’re wondering if the Sino-Swedish contender has a chance against the Model 3 in a straight line, Rory Reid is much obliged to quench your curiosity with a series of drag races. The motoring journalist we know and love from Top Gear has also decided to pit these two against each other in reverse, and the results are – dare I say it - surprising.

In the correct direction, the Polestar has the upper hand off the line in cold weather and wet conditions. Rory’s colleague soon catches up in the Tesla, and it’s pretty easy to guess who blasts over the finish line first. “Just to make sure that wasn’t a fluke,” the drag race is repeated and the Model 3 Performance crosses the line first yet again.

The question is, can the Polestar 2 Performance redeem itself in reverse? Much to the surprise of Rory and his comrade, the Tesla can’t do better than 15 miles per hour (24 kilometers per hour) going backwards. Just so you know, every Tesla since the first iteration of the Model S is electronically limited to 15 mph in reverse over safety reasons.

Auto Trader hasn’t provided elapsed times for any of the three drag races, nor do we know the trap speeds of the Model 3 Performance and Polestar 2 in Performance flavor. When all is said and done, I think that we can all agree the Tesla is the biggest thriller in a straight line.

Oh, and by the way, the American automaker also has the upper hand in terms of driving range. The go-faster version of the Model 3 for the United Kingdom is rated at 352 miles (566 kilometers) while the Polestar 2 with the Performance Package offers as many as 292 miles (470 kilometers; WLTP). 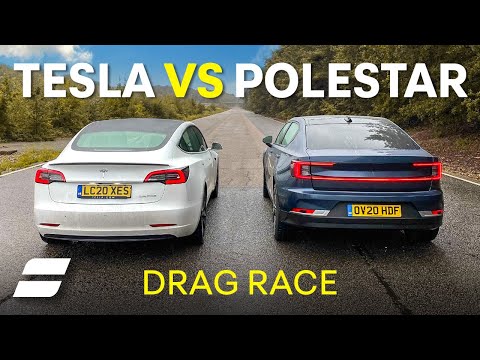