2 Tesla Model 3 Is the Quickest-Selling Used Car in the U.S. Telling Us Two Things

4 A Tesla Model 3 Can Successfully (But Briefly) Double as a Boat, Here’s Proof

Home > News > U-turn
Vlad Mitrache
Less than a month ago, the rear bumper of a Tesla Model 3 flew off after the driver went through a bit of water accumulated on the side of the road. Tesla refused to take responsibility for the fault, famously invoking "an act of God."
1 photo
Well, as so many people pointed out, it looks like the design of that rear bumper can raise all sorts of problems for Model 3 owners that don't necessarily have anything to do with water or any deity. When designing the car, Tesla decided to fuse the underside panel and the actual bumper into one large piece, presumably in order to boost the vehicle's aerodynamics and increase its range.

While that worked like a charm, it led to some other issues the engineers and designers did not foresee. Apart from the increased risk of detachment proven by the rain incident, another Model 3 owner now identified a new, much heftier drawback.

A man running the YouTube channel called Dirty Tesla (talk about foresight) had the curiosity to check what was hiding inside that lower rear part of his car and, to his surprise, he found over 32 pounds of dirt. That's right, a bucketful of dried out soil that wouldn't have gone anywhere without the owner's intervention. In fact, it would have probably kept piling on until there was no room left.

The man confesses he does a lot of driving on dirt roads (hence the channel name), so city dwellers should probably be safe from anything similar. He also reveals he previously found 15 pounds of dirt after just five months of ownership, so this 32-pound load coming after 13 months represents an improvement.

So, apart from being an obvious design flaw, what's the big deal with carrying 32 pounds with you? Well, the first thing that springs to mind is a decreased maximum range. Apparently, that's not the case. He says his range remained the same after removing the stowaway, so that wasn't really an issue. If that's the case, we would be curious to see what happened if he never cleaned it again. Would the panel crack under the weight? Would the dirt stick out after filling the entire bumper? Dirty Tesla, if you can hear us, please consider leaving the dirt in from now on, just as an experiment. Hopefully, we'll still be around in a few years to see what happened. 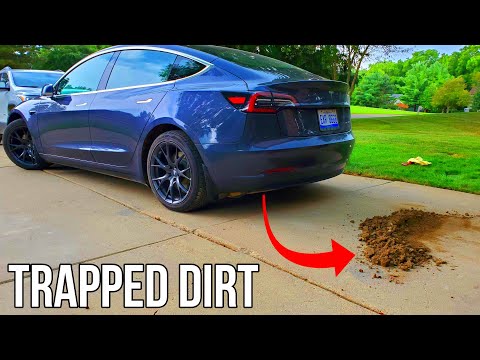