1 Autopilot Prevents Pedestrian Collision in Washington, Might Have Saved His Life

Home > News > Technology
Vlad Mitrache
This won't be the first performance-oriented electric vehicle, but it could very well be the first one to be built in a garage that goes over 1,000 horsepower.
3 photos

It comes from a man you might have heard of before. Jason Hughes is a Tesla owner who doesn't just drive the car around, but also likes to poke his nose in the backstages. In the past, he was the man who found a little image hidden in his car's menu that announced a future P100D model, but he also retrofitted an early-version Tesla Model S P85 with all the hardware it needed to be able to run Autopilot.

All this work brought him the nickname "Tesla Hacker," but if this latest project of his is taken to fruition, it might change to "Tesla Master." Jason is now building a 1,000 hp custom electric vehicle using parts from Tesla, but also Chevrolet's Volt. His is just beginning his work, but the plan is already laid out.

He'll use two Tesla performance drive units, the ones that power the rear wheels on Tesla's P90D Ludicrous models. The standard cars come with a much more feeble front motor, but Jason plans to use two identical ones for both axles. With 500 hp coming from each motor, that would make his future rig a 1,000 hp vehicle. Bear in mind these figures are still completely fictional at the moment, though.

Power will come from two Chevrolet Volt battery packs with an extra six Tesla battery modules to assist. Six times five and two times sixteen means the total output of the batteries will sit at around 62 kWh. According to Hughes, the maximum range should be at around 120-150 miles, which isn't too shabby for a car that should be able to put to shame any current Tesla in a drag race.

Jason hasn't said what vehicle he'll use as a platform for his system, but Electrek believes it's going to be a Mitsubishi 3000GT based on a hint he dropped calling the monster "3000EV." Whatever it ends up looking like, we'd sure like to see it accelerate. Below you can see an early test of the two motors, with one of them connected to an axle. But while the video itself isn't that remarkable, the way that garage looks is: it's a testimony to the time and effort put into this project and a guarantee that it will be taken all the way to the end. 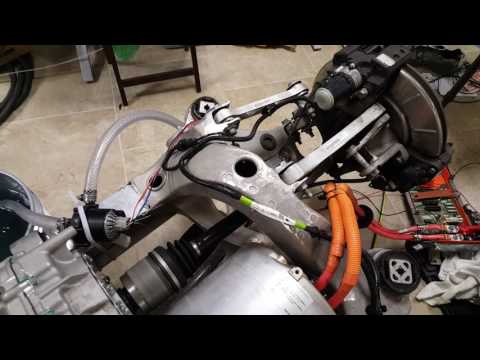