Tesla FSD Tackles Snowy Road - Is This What "Better Than Human" Looks Like?

Vlad Mitrache
You may not believe it after watching the clip below, but Elon Musk actually said at some point that autonomous driving was a "solved problem" and that Tesla's FSD Beta is already safer (and therefore better) than human drivers.
6 photos

To be fair, it very rarely snows in California, but even though that's where the bulk of Tesla's U.S. market is, it doesn't mean you don't get people living in Colorado or Minnesota - or indeed Montana, as is the case here -who also want to own and drive a Tesla. Do these guys essentially pay the full price for the "Full Self-Driving Beta" feature even though they're only able to use it during a fraction of the year?

In short, yes. As the clip of this Model 3 owner clearly shows, the advanced driver's assistance system (ADAS) is completely useless when the roads - and everything else around them, for that matter - are covered in snow. And if you ever tried to take a picture against a snowy background, you will know why.

Tesla's FSD Beta notoriously relies solely on "vision" to navigate the car around, with the myriad of cameras offering a 360-degree view around the vehicle supposedly trumping the two (at best) front-facing eyes that humans possess. This obviously ignores two things.

One is the fact that, just like the cameras, the eyes are simply there to capture the information which is then processed by the brain, so that's where the magic really happens. Having full visibility in every direction at all times is great, but it's what the AI masquerading as a brain does with it that ultimately matters.

It's the second issue, however, that is mostly relevant to what happens in this clip. The dynamic range of the human eye is famously much greater than that of any digital camera, which means that even if it is outnumbered, it is still a vastly superior sensor quality-wise. What that means is that if a certain image has an area that's too dark compared to the rest of it the sensor will just register that as pitch black. It's why the FSD Beta fails to pick out anything outside of the area covered by the headlights at night (especially on an unlit road).

The thing is the same can happen in the reverse situation, which is what a layer of snow will do. The cameras essentially have a choice of calculating exposure based on the snow, and therefore losing any detail on all the other elements in the scene by making them too dark, or focusing on these objects and treating the snow blanket as just a big white patch.

The short yet nerve-racking trip you'll see below seems to suggest the system is going for the latter option, though it's hard to be sure since it appears to be almost completely thrown-off by everything around it. The bottom line, though, it's that it is completely unusable in the snow.

"So what," you'll say, "just don't use it in the snow. It's not that hard." Yes, it isn't, but shouldn't Tesla be the one to recognize this fact and actively prevent drivers from engaging the feature? Shouldn't the AI realize the cameras can't actually see the damn road - a bare minimum for controlling a vehicle efficiently, wouldn't you say? - and let the driver know they should fend on their own?

It's definitely what the AI should do if the "I" part actually stood for something, but at the end of the day, it's not so much the computer's fault since it can only do what it was programmed to in the first place. It's all down to the excessively relaxed approach that Tesla has had from the get-go when it came to striking a balance between promoting its product and overall traffic safety.

Hit the "play" button below and prepare to be amazed at just how completely inept the system was at coping with the conditions, and how it kept on taking the challenge even though it should have been clear after the first attempt that it can't function properly.

The FSD fails to pick up the deep snow sitting on the side of the road, plowing straight into it the moment the driver asks it to take control. This poses several threats for both the Tesla and any other car that might happen to be on the road at the same time (luckily, it looks like the traffic was extremely light).

Going through the thick snow cover means the vehicle will have a natural tendency to veer toward the right, and since the AI can't see where the edge of the road is, it could very well end up in a ditch. Alternatively, the maneuver to avoid that can be quite violent as it requires counter-steering and throttle input. Get these wrong and there's a high chance the vehicle might spin and end up on blocking the road.

Perhaps the most important thing to take away from this clip isn't just to refrain from engaging FSD Beta on snow, but rather to always question whether Tesla's ADAS is actually in control when it is in action because it is clearly overestimating its abilities. Stay frosty. 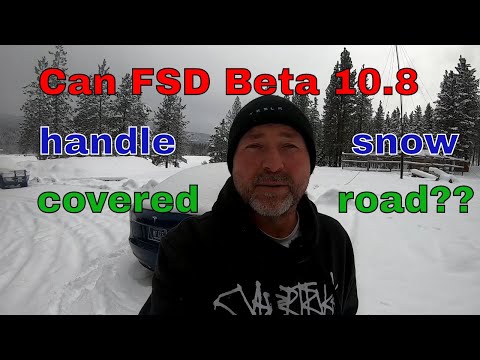 Don’t You Think the BMW i Vision Dee and the Peugeot Inception Concept Are Kinda Similar?See all editorials