1 Apparently, Tesla Model 3 Has a Farting Problem Now and People Are Embarrassed

Tesla introduced new features in the latest Holiday Update that bumped the software version to V11. One of the most appreciated ones was the Light Show, which make the car’s lights flash with the music. The feature was a real party starter on New Year’s Eve, as Tesla fans all over the world gathered in large groups to perform the famous choreographed light dance.
15 photos

As soon as people learned about the Light Show feature in the V11 software update, the Internet was flooded with videos demonstrating the futility of this new entry in the cars’ infotainment menu. It’s not entirely new, as folks with a Tesla Model X have boasted it for years, but the latest update bringing it to the other models in the lineup means more than two million Tesla owners get to play with the Light Show if they so choose.

And they did, even though things were not entirely smooth for some of them. People reported the headlights stopped working after the Light Show performance. It was not like the performer was tired after the show, because the glitch in the Matrix meant the headlights could still keep the show going. It was just that their normal functionality to light the road at night was not available anymore. We hope this was an isolated case only, as the Facebook post complaining about this disappeared in the meantime.

Nevertheless, people were not being put off by the mishap. New videos show Tesla owners gathered in droves in many places around the world to perform the Light Show. New Year’s Eve was indeed a good opportunity to put the new feature to work.

No less than 23 Tesla owners in Quebec (Canada) decided to mark the New Year with a wonderful mass Light Show performance. The car orchestra was, naturally, directed by a Model X, with its original Light Show feature. The video below shows some professional skills, even involving a drone for aerial footage.

It was supposed to be the largest group Light Show ever, but it was later revealed some guys in Switzerland put it to shame. Even though their video is not as good and sometimes you can barely see what’s happening, we must give them credit for the (as of now) largest Light Show performance. Not to mention that the 40 Tesla cars gathering in Kemptthal, Switzerland, performed the Light Show on December 27.

We hope no car suffered headlight damages during those Light Show gatherings. Nevertheless, the trend was started and now the sky is the limit, with possible Guinness records in sight. The question is not how many cars will perform the next monstrous Light Show, but how far can they spread them to be still considered as part of the same group. 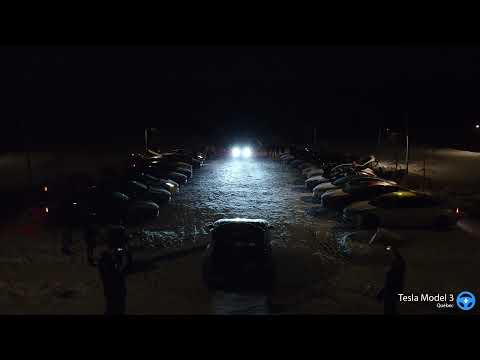