3 Tesla's Autopilot Makes the "Invisible Driver" Prank so Much Better

Tesla Denies Claim Of Model X Unintended Acceleration, Logs Back It Up

Tesla’s Autopilot system was blamed for an accident without it being at fault. This is not the first time this had happened, and it may not be the last, either. However, Tesla wants people to trust its Autopilot system and autonomous cars in general, so it has issued a statement to clarify the situation.
1 photo
As we wrote yesterday, the driver of the Tesla Model X that was crashed into a building in Irvine, California, claimed the car accelerated on its own while entering a parking space. The operator argued that an attempt to decelerate manually was made, but the crash happened autonomously.

The guys at Electrek contacted Tesla on the matter so that they could clarify the situation. Luckily, all the Model S and Model X cars have a permanent Internet connection, which sends data to the company.

Included with the transmissions are “logs,” a term used by IT specialists to describe the computer equivalent of a remarkably detailed diary, which is written by each program and each machine that’s capable of this.

These logs cannot lie, and they will be the equivalent of black boxes for airplanes once the autonomous car industry starts selling cars to the public. This way, Police and authorities will be able to access logs like these to see if the self-driving system malfunctioned, or if the driver was the real operator of the vehicle and they are trying to put the blame on the computers.

In the case of this accident, Tesla Motors assures everyone that the Autopilot was not at fault for this crash. Furthermore, the company says the Model X operated in a way “consistent with the driver’s actions.”

The vehicle has been confirmed by Tesla as being operated in “manual mode,” as the Autopilot function or cruise control features had not been activated at that time or in the minutes before the incident. According to the logs, the accelerator pedal was abruptly pressed to 100% while the vehicle was driving at six mph (9,6 km/h).

In spite of the clear statement from Tesla, the owner still claims the vehicle is at fault. He had had the car for five days when the incident occurred, and his wife was operating it at the time of the accident. The owner reassured everybody of his faith in his wife’s driving abilities, and is convinced she did nothing wrong. 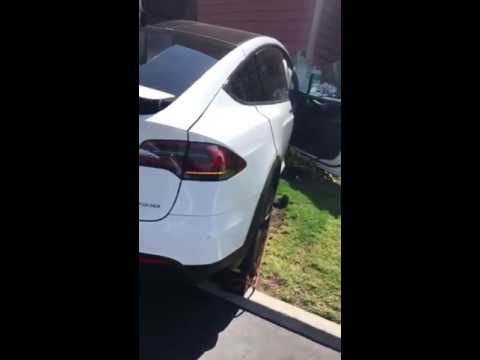