2 Tesla Model X vs. Audi e-tron Drag Race Is Much Closer Than Expected

Alex Carausu
Rumors about the Tesla Cybertruck have been circulating for a while now, and before today nobody really knew what to expect.
10 photos

Well, the wait is over, and after seeing it in the fllesh, many have said the Cybertruck strongly resembles a Lotus S1 Esprit or a DeLorean, but somehow on steroids. We think it looks more like a toolbox on wheels.

The out-of-this-world looking Cybertruck will start at $39,000 for the 250 miles range model, while the top of the range with 500 miles worth of electricity at $69,900. As for the cargo space in the back, Cybertruck will be good for 3,500 lbs, and could comfortably seat up to six adults.

Unfortunately the car suffered an embarrassing moment on stage during the official presentation, as Musk was keen on showing just how tough the pickup is. But it looked like Cybertruck had other plans, and it literally crumbled on stage.

It happened while the CEO was trying to emphasize the nearly “armored” body that could withstand sledgehammers and even small caliber bullets, but both front and rear windows collapsed. It’s hard to believe that this exercise will not “hurt” the launch in some way.

Soon after realizing the potential damage this has caused, Musk said: "It didn’t go through, that’s a plus. We threw wrenches, we threw literally the kitchen sink at the glass and it didn’t break. For some reason it broke now… I don’t know why."

For now, Tesla can remain calm, as the stock price of the company didn’t change a lot during the after-hours trading, so it might just be a near-miss situation.

That being said, we’re still excited about the courage of Tesla’s design engineers. I personally did not envisioned such a futuristic, sharp-edged “bulletproof” architecture. 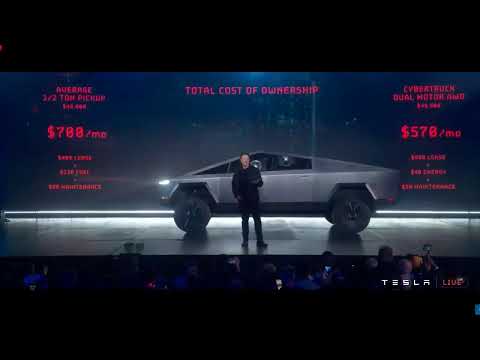