What Elon Musk managed to do is absolutely remarkable. Which of his achievements are we talking about? Yes, very pertinent question, but we’re obviously discussing his endeavor into the automotive world.
1 photo
From a small sports car with a borrowed chassis and body to the one brand that everyone’s talking about in less than a decade: if Elon Musk enters the same field as your business, then it’s clearly time to pack up and look for a job, as he’ll quickly go to the top.

We realize we sound like Tesla fanboys, but we’re not. These are just plain facts for everyone to see, even those who think these electric cars are overrated and still have a lot to prove for themselves before they can even think about tackling the big boys. And while we’re busy being tied up in these old ways of thinking, Tesla Motors silently creeps further up into the conscience of everyone it comes into contact with.

In fact, those who viscerally hate the brand are actually doing it a favor. It’s obvious the cars are at least good, if not great, and spending so much time trying to bad-mouth them to convince everyone they’re crap doesn’t have any other result than increasing the brand’s awareness.

If you’ve never heard of Tesla, you’ll want to go see what kind of car made that poor man say such terrible words. And you’ll find yourself face to face with a sleek, practical EV with the biggest range available for this type of vehicles, and a well-thought recharging network. Oh, and ridiculous off the mark acceleration.

And if your first contact with the brand happens to be a clip such as the one below, you’re sold for life. This is clearly a commercial clip meant to advertise Tesla’s presence in Hong Kong, but it’s done in such a way that, had it lasted a little longer, you would be forced to take out the popcorn.

It’s beautifully shot (the Hong Kong scenery helped there), nicely narrated (some of the actors were a little too enthusiastic to appear credible), and masterfully edited to keep you entertained throughout even though nothing really happens. Oh, and then there’s the music: you constantly expect something truly great to happen.

Watching this clip can have any of these two effects on you, or maybe even both: it’ll make you want to buy a Tesla (if you didn’t already), and it will make you at least consider moving to Hong Kong. For the abundance of Superchargers for your new Tesla, if not for anything else. Haven’t you been paying attention to the clip? 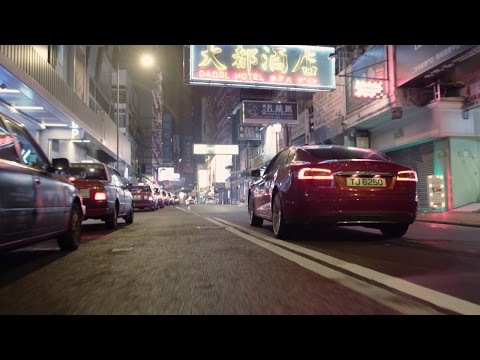