2 Tesla Employees Fired by Blog
Car video reviews:
Up Next 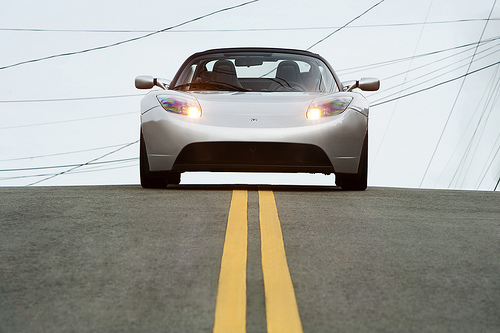 That's actually not too bad for an electric car as it will turn out into good press for these green cars. People and especially speed enthusiast were a little worried that these new cars won't be able to keep up with the speeds done by the cars with internal combustion engines.

And you can't blame these guys, since all the electric cars so far looked like alien transport pods. The Tesla means to change that image, and with an awesome time of 12.757 seconds on the quarter-mile drag strip it's looks like it's on its way.

According to Autoblog, this particular version of the Tesla has a new model powertrain installed, a 1.5 one which significantly improves the performance of the car. The original transmission on the car used two speeds, but this new version has only one speed that delivers power in one seamless surge.

Nailing the 12.8 time wasn't even aided by the driver which managed to score a poor reaction time of .764. To those of you who watch the dragster series that might sound like an eternity. But it just goes to show you that the car can pull its weight around.

The top speed was 105 mph, so it's only natural that the Tesla won the race. It's not known whether the car in the other lane was an electric car also or a regular. It's safe to say that none of you thought the little Tesla could pull it off. It certainly changed the way we look at electric cars.