So, we know that Tesla's Autopilot hasn't had the welcome it probably hoped for in Europe. Various entities from both Germany and the United Kingdom condemned the American EV maker for the way it advertised the system, though Tesla remains adamant in its position.
1 photo
Regardless of on which of the two sides of the fence you're on, or whether you're actually sitting on it, there's one thing that we should all agree on: the Autopilot isn't perfect. It's probably less flawed than its detractors think it is and a lot more flawed than its ardent supporters see it but perfect it is definitely not.

Various videos on the web have shown its limitations and one thing that has always scared the system and sent it crying back to Elon Musk was a roundabout. For some reason, the vehicle's AI doesn't perceive the rounded intersection to be as simple as the rest of us do, so it used to beep the driver to take control whenever it was about to enter one.

Recently, after several updates, the Autopilot has found the courage to navigate roundabouts, even though the results aren't always ideal. This makes the decision of this UK-based Tesla owner all the more baffling. Instead of trying at a regular roundabout, the guy running the YouTube channel called "Tesla Driver" had a go at what can only be described as "the roundabout from hell."

The thing actually goes by a much friendlier name - the Swindon Magic Roundabout - but let's not forget that demons, gorgons, and harpies are also magic, so don't be fooled into a false sense of security. The name is actually misleading because it's not a roundabout, but rather six of them morphed into one giant confusing mess. You've got five little ones on the edge that go the right way and a big one in the center that goes the other way around. Confused? Good, you should be.

And so was the poor Tesla Model 3. The simple sight of the damned thing was enough to make it go "nah-ha, I'm not even going to try that" and prompt the driver to take over. Subsequent attempts yielded slightly better results (as in the car at least gave it a try), but there's no way the Autopilot is getting you through there without climbing a few curbs and smashing a few cars in the process.

The video posted on August 16 caught the attention of the Wiltshire Police who reacted in a very British way: polite but firm. According to the Swindon Advertiser, they made it clear that any such further attempts might land the driver in court.

“The UK’s current legislation does not allow for their [self-driving cars] use on public roads,” a spokesperson for the Wiltshire Police Department said. “The driver in the YouTube video is breaking the law when he allows the car to take control as he is not in proper control of his vehicle and, if stopped by officers, would be asked to attend court.”

You can watch the video that prompted this reaction below. The Model 3 owner did choose the right time to try out the system's performance - Sunday morning at 5:00 AM - but the law is the same 24/7, so while that shows responsibility on his part, it doesn't really change things as far as the police is concerned. 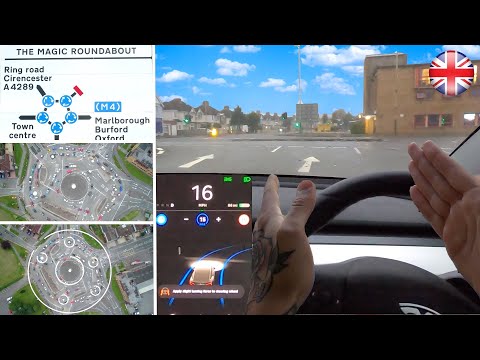