While major drag racing events take a lot of planning and usually involve quarter-mile monsters that eat a lot of greenbacks to get in top shape, you can always have fun without spending a fortune. That’s the marvelous thing about straight-line acceleration entertainment: one can always use just about anything that comes in handy. Including dad’s GMC Acadia SLT daily driver... if you’re a ten-year-old!
16 photos

The host of the Jmalcom2004 channel on YouTube is no stranger to big venues where thoroughly modified cars will duke it out all day and night just to make sure they get the quarter-mile glory they (think they) deserve. But truth be told, we first met with his drag strip efforts while enjoying the quarter-mile skirmishes in a low-key format, on a little racetrack that only had the bare essentials.

Even so, it’s sometimes a lot more fun than witnessing an enormous event from somewhere in the distance. After all, these intimate small-town drag strips get everyone a lot closer to the eighth/quarter-mile action. If the competitors have what it takes, we’re not going to complain. And this time around, it’s all about the people doing the battles. Or, rather, one of them in particular.

After all, the setting is a bit lacking otherwise, because this little strip only has the lanes and guard rails... and almost nothing else. Not even the Christmas tree, let alone the ET and trap speed electronic boards. And it doesn’t matter, because here we have a kid running the show like a true drag strip boss.

We’re not kidding. The dad is also present and running point on being the coach (and anything else might be needed). We appreciate that his ten-year-old is wearing a helmet, as well as the fact that he’s not driving on public roads. Because we really started rooting for the little one. After all, he’s using his dad’s GMC Acadia SUV, which is probably the family’s daily driver, to give adults a lesson in motorsport!

So, while the first race wasn’t caught on camera, it seems that he was already winning by the time we caught his Acadia lining up with a Chevy Silverado 2500 HD. And it seems the pickup truck driver is either a sore loser or somebody who wanted to give the youngling a boost in confidence, as the Acadia and Silverado duke it out across four battles... and just one of them is won by the bigger (both literally and figuratively) opponent.

Additionally, probably to show us the kid isn’t winning by exception, there’s also a Honda Pilot intertwined with the HD truck action from the 4:15 mark. And guess what, the ten-year-old Acadia driver doesn’t yield... 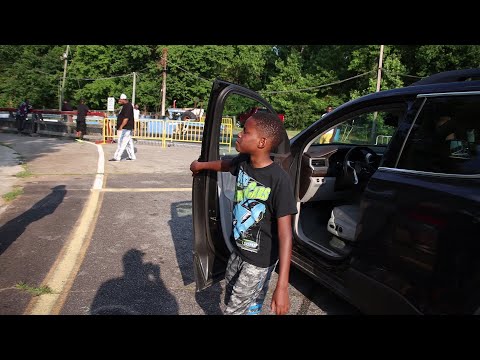