1 US Veterans Riding Indian Cruisers to Sturgis As Therapy

3 Dream The Impossible Documentary About Disabled Riders Premieres in May

4 Paralyzed from the Chest Down and Racing Bikes: the story of Talan Skeels Piggins
Car video reviews:
Up Next

This BMW Z4 Coupe Is Glued To a Viper V10 Engine

Technology has the power to change the world for the better, and it can improve the lives of millions of people that have lost some of their abilities in various situations.
6 photos

When one usually thinks of robotics and exoskeletons, the first images that come to mind are of prototypes that can mimic human behavior, while the second term reminds some of the Caterpillar P-5000 Work Loader from Aliens. However, these things are real, and the ReWalk is one of them.

This article is not about robotic exoskeletons, but what can a person do with one of them and an unmeasurable amount of willpower. We are talking about Claire Lomas, a 36-year-old woman from Leicestershire, who managed to complete one of the most famous half marathons in the world, the Great North Run.

At first, completing a half marathon might not seem newsworthy, but it happened in five days. Why, you ask? Well, Claire is paralyzed, and she does not feel anything below her chest.

With an immense strength of will and a mountain of determination, she completed a half marathon (21,09 kilometers or 13.1 miles). It was all possible thanks to the robotic exoskeleton called ReWalk, the BBC notes.

The device relies on motion sensors to help the user move through lifting legs and walk. Unfortunately, the user must use crutches to maintain balance, so there is no handsfree operation.

The suit is powered by a backpack, which carries a battery charge good for eight hours of operation. Sensors in the feet detect when the user lifts weights, and the braces support the legs of the user and rotate their joints to walk.

The entire movement was controlled from the upper body of the user, but this sounds like a complicated endeavor just to walk around on a flat surface. The determination of Claire, who finished the 2012 London Marathon (42 km or 26.2 miles) in the last place, is an inspiration to us all, and should be the same for others.

If there is someone who is not already impressed by her story and struggle, then you should know that the woman completed the half marathon while being 16-weeks pregnant, thus dealing with morning sickness while walking for a few hours. Training consisted of walking up to three miles a day (4.82 km), no matter what, and it turns out that it was worth it. 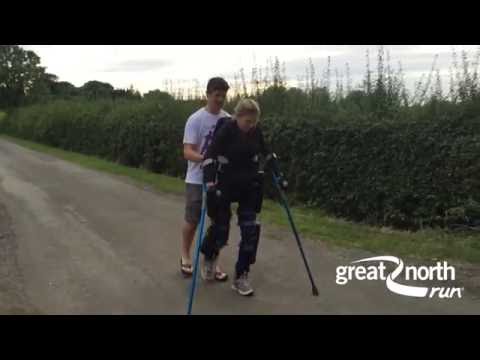