1 Art Meets Nature in This Cozy, 40-Ft Skoolie Designed for Full-Time Living on the Road

There’s something about bus conversions that appeals to people. They offer limitless possibilities of customization, and they’re also a bit roomier than an RV. This is the case of this Skoolie as well, which offers just enough interior space for Deyana and his fur baby Honcho.
9 photos

Deyana is a virtual special education teacher that always loved to travel. Three months ago, she made the switch to a nomadic lifestyle and hit the road together with her dog in her self-converted school bus.

It took her around 11 months to convert it into a cozy home on wheels, but it was totally worth it. The first thing you’ll notice about Deyana’s Skoolie is that its interior is filled with light. That’s because there are two skylights installed in the place of the old emergency hatches that the bus came with. One of them does open up, allowing her to access the deck mounted on the roof.

The kitchen is split into two separate sections. On the left is a three-burner propane cooktop with an oven. Underneath is a large cabinet that Deyana uses to store her cookware. On the right is where she prepares her meals since that’s where most of the countertop space is located. There’s also a deep sink, several spice racks, and some drawers and cabinets.

Next to the kitchen is a small couch, which can be turned into a small bed when needed. Deyana also has a table that she can add to this area so she can dine or use the space for work. You’ll spot a small cabinet that’s positioned next to the couch – that’s where she stores the table or some other gadgets.

On the opposite side are a side-by-side refrigerator and a generous pantry. At the rear is the bedroom, which includes a queen-size bed that doesn’t really look like anything you’ve seen before. That’s because underneath, it has an opening specially designed for Honcho to use. That’s where her furry friend spends its time and keeps its toys.

And if you’re wondering where Deyana is keeping her clothes, well, she has a massive wardrobe with a full-length mirror right next to the bedroom. Inside, she has enough room for everything. The rig also has a bathroom, which features just the shower – no toilet. She might want to change the design in the future, but for now, she’s happy with the outcome.

Recently, the guys from A Bus Life Story offered a full tour of her beautiful school bus conversion. You can find out more about Deyana and her tiny home on wheels from the clip down below. 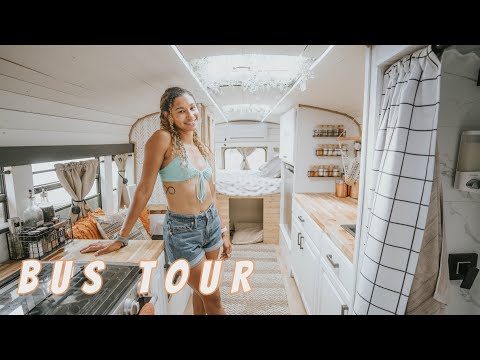