1 Tesla Model 3 Fights Porsche Taycan, 5 Others for Car of the Year Title

5 Porsche Taycan Is Technically Impressive, But Is It Fun to Drive?
Car video reviews:
Coverstory

EPA mileage numbers for the new Porsche Taycan EV have disappointed many, who say a car that can only go about 200 miles before needing to stop is pointless. However, this video review by Doug DeMuro is one of the most popular on the subject right now and could change your perception.
1 photo
It's a pretty long clip at 35 minutes, but that's because Doug explains the Porsche brand and what it stands for first, only after focusing on what the EV brings to the table.

The video was shot before the official EPA numbers came out and it suggests they're too conservative. At about the 7:43-minute mark, you may notice the indicated range is 219 miles.

But we're kind of missing the point here. You don't buy a Porsche 911 for the mpg numbers, but for the way it makes you feel. It's not something quantifiable or even cutting edge, but the "seat of the pants" thing that cannot be explained. And apparently, the Taycan has that too.

Not that it's lacking in the technology department either. While Tesla undoubtedly built an awesome set of EVs, it doesn't race anything. The Taycan, on the other hand, brings a clever thermal management system that basically makes it as fat at 10% charge as at 100%.

Another particularity is the 800-volt architecture that allows 80% charge to be reached in 22.5 seconds. The only problem is there's only a handful of chargers like that in California, for example.

It wouldn't be a DeMuro video without him highlighting the quirks of the car, which range from the way the lights are shaped to the abundance of screens. It's an easy car to hate, but Porsche is right at the tip of the electric revolution right now, and luxury buyers will find plenty to enjoy in the Taycan Turbo S. 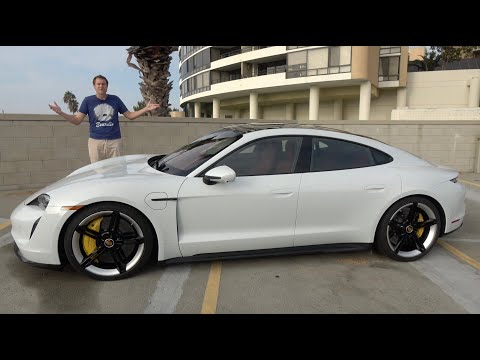