3 Meet Airover: the Versatile E-bike That Was Made to Break the Norm

What’s small, can transport you to work in a timely manner, and then folds neatly until it fits under your desk? The answer is the Tatamel Bike, an electric moped that’s nearing production.

Tatamel Bike, the Tiny e-Bike That Folds Down Neatly to Fit Under Your Desk

Tatamel Bike, or Tatameru Bike in Japanese, has been around for almost a year, but it’s just now that company ICOMA is ready to bring it into production. Unveiled on national media earlier this week, it’s an electric moped that has the ability to neatly fold onto itself until it’s no larger than a suitcase.

As of the time of press, there is no word on whether this transformative e-bike will ever be marketed outside of the country, or pricing. There’s no harm in window shopping, though, especially since this tiny and undeniably cute vehicle seems to hold the key to one of the most pressing problems in the urban landscape: space – or lack thereof.

If you live in the city in an apartment building, don’t own a car or are not particularly fond of driving, and have to commute to work, you know what it’s like. You could get a motorcycle, but that would mean parking it outside. A bicycle would be easier to steal, especially if you don’t have the space to store it inside your apartment. Other electric variants, whether e-scooters or larger mopeds, pose similar issues.

Tatamel Bike doesn’t, because it can become very compact once you fold it down. Introduced as a concept one year ago, it’s now going into production with ICOMA. Folded down, it measures 70 cm (27.5 inches) long, 68 cm (26.7 inches) tall and 26 cm (10 inches) wide, so no bigger than a piece of luggage. The company doesn’t mention the weight of the vehicle, which right now, seems like the only thing going against it in its run at being the most city-friendly means of personal transportation.

When ready for the road, the Tatamel Bike folds out: the seat extends backward, the frame folds out, as does the handlebar. Sizes almost double: the e-bike is now 123 cm x 100 cm x 65 cm (48.5 x 39 x 25.5 inches). It’s still small by comparison with similar vehicles, but it has everything you need for it to be road legal, including a bright LED headlight, brake lights and turning lights, and you also get pegs for your feet and a kickstand.

Without a doubt, even when it’s ready for the road, this e-bike is still incredibly small and, because of it, only comfortable to riders of a slender constitution and no taller than medium height. The idea with it isn’t to be an e-bike that looks intimidating – or particularly impressive in any way –, but to be something that gets you moving than you would by walking or pedaling, and without having to resort to using a passenger car or public transport.

Power comes from a lithium iron phosphate battery and an unspecified motor that can take it to speeds of up to 40 kph (25 mph). Range is an estimated 50 km (31 miles) on a single charge, which probably means daily charging, depending on your commute. A portable power supply is included, so you can charge your smaller devices on the go.

Another way in which ICOMA hopes to attract young buyers (because this is probably the target demographic for this product) is by offering customization options. The company says the side panels on the Tatamel Bike can be made of whatever materials and in whatever colors you like best, so that you might actually be able to match it with your furniture or workstation – so that it perfectly blends in. You can further add illustrations or accessories, according to your exact needs.

After all, if you’re going to be riding on such a ridiculous (but cute) thing, you might as well own it. 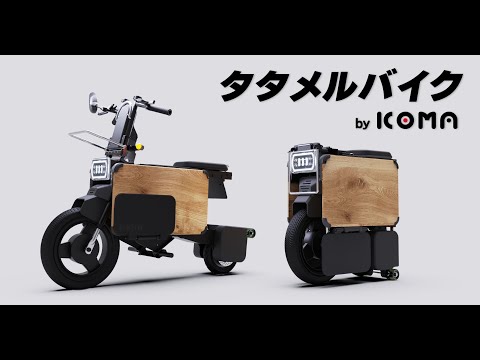