4 A Tank Is an Odd But Awesome Choice for a Grocery Getter, Soldier Proves

KFC is one popular eatery, and one YouTuber decided to take the tank to the drive-thru of the nearest fast-food franchise. Don't rush to conclusions just yet; it's a "challenge accepted" adventure for the contest-hungry and fun-chasing Eddie Hall. Below is episode four of his tank-filled bravados.

Some time ago, we showed you the brief history of his automotive shenanigan that came in the armored shape of a road-legal light tank. Eddie bought himself a battle-born toy to drive around from time to time. Always a practical joker, he asked YouTube to help him with new adventure ideas.

And so, the latest in Eddie's tank trickeries is going to KFC for a meal. All excellent and good so far, but there is a catch – The Beast stays in his Beast for the entire challenge duration. Of course, this means there is only one correct way of doing this – the drive-thru. Drive in, place an order, advance, take the orders, pay, park, eat, and drive away.

At least, that's how it would be for regular motorists with standard vehicles but driving a tank in narrow spaces is an entirely different story. Since this means of transportation was designed to go above or through obstacles rather than around them, tank designers weren't particularly interested in the "cornering in tight spaces" score.

Eddie has a tank license, and he proved his prowess at the controls of the tracked hunk of steel, taking it for a school run and a fuel fill-up and to McDonald's. Since he passed all tests with flying colors, viewers, followers, and fans took it one step further.

So, here it is - a small tank (small in tank measurements - the Beast is no scale model and still takes up quite a lot of space) in a narrow drive-thru. "What could go wrong?" I can hear you wondering. Well, not much, if you can tackle the sequence of maneuvers described earlier without flattening the restaurant.

Then comes the time to get creative – pick-up and payment. This part is a little tricky since Eddie's challenge is to do the entire drive-thru sequence inside the tank. As Eddie explains in the intro of his video – see it below – and then demonstrates, it's physically impossible to reach the window from the driver's seat.

Well, almost impossible since Eddie has a broad reach, with the help of his trusty secret weapon. No, not some high-powered piece of tank armament, but a rather delicate - and foldable - litter pick. Take one item at a time, clip it with the picker's jaws, put it in its place, repeat. Card, soda bottles, food bags, sauces, everything goes thru the oversized pincer (I especially enjoyed the sauce bags collecting part).

While Eddie makes everything look like child's play, it's not. You can see in the gallery how close to the walls the tank is, and one wrong turn would have quite an impact. Since the tank turns on its tracks, the rear steers as much as the front does.

But, since the road limit for tanks is 20 mph in the U.K. (32 kph), speed is not as big a concern as making turns is. Going through the narrow strip without as much as disturbing a spec of dust is one solid proof of heavy metal mastery from Eddie Hall. After all, he set the still-standing world record deadlift with 1,102.3 lb (500 kg), amongst several other feats of strength. So, a nice little treat to celebrate his new tank trick would complement this smile-spurring, gawk-stirring, jaw-dropping, head-turning tank driving. 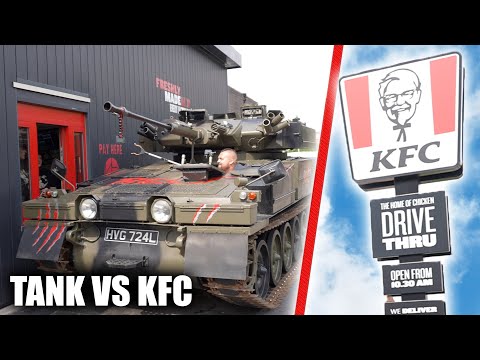