5 Autonomous Submarine Scans for Deep Sea Lifeforms - Autosub6000
Up Next

Home > News > U-turn
Ionut Ungureanu
In case you’re still among the ones that believe Dubai’s economy gets its fortune from oil, then you should reconsider since less than 5% of the emirates’ revenue comes from that today. The emirate’s Western-style model of business drives its economy, the luxury, opulence and five-star lifestyle are rather the reason the city is what it is now. Of course, supercars are part of that equation.
1 photo
Tourism, aviation, real estate and financial services are where the big money is coming from folks and we'd learn from it. Sure, Dubai also attracted world attention through many innovative large construction projects and sports events. Heck, as of 2012 it’s the 22nd most expensive city in the world and the most expensive city in the Middle East.

Since it’s a city that is estimated to reach a 3.5 million population by 2020, we’re obviously looking at a place with a lot of cars. In 2009, according to Dubai Municipality statistics, there were an estimated 1,021, 880 vehicles. Considering the level of wealth businessmen in the city have, guess where some of the world’s most expensive cars role everyday (and every night for that matter).

This is the main reason this 22-year old British photographer/film maker has decided to document this quite unknown world of supercar owners of Dubai. We’ve stumbled upon people doing similar stuff around the planet’s wealthy few, but we find this guy’s work quite impressive.

In the latest video story he did, we can see a jaw-dropping alignment of hundred-thousand-dollar supercars and even some hypercars. We have the chance to observe beauties such as Maserati GranTurismo MC Stradale, Aston Martin DBS, Lamborghini Aventador and one Murcielago, several Ferraris and at least a bunch of Posche and Mercedes rides.

We’ve identified every single one of the cars in the video below, but we’re not here to build up registers. We’d only like to add that you’re not daydreaming, that truly is a McLaren P1 and yes, the other speed monster indeed is a Bugatti Veyron Vitesse.

With no further notice, we’ll leave you with this less than 3-minute long video worthy of every petrol head’s appreciation. Enjoy! 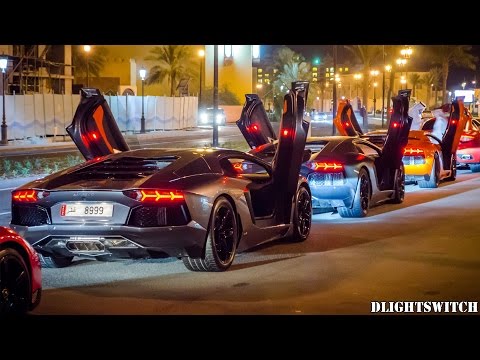