3 Forgotten by Many, the Toyota 1GZ-FE Was Japan’s First and Only Mass-Produced V12

4 The Story of Porsche's V10: From Failed Racecar Engine to the Heart of the Carrera GT

5 Remembering the McLaren MP4/4 and How It Became the Greatest F1 Car of All Time
Car video reviews:
Coverstory

Throughout its nine-decade history, Porsche has built some of the automotive industry’s most iconic boxer engines but, in the 1980s, the company decided to change the recipe and created a powerful twin-turbo V6 that helped McLaren dominate Formula 1.

By the early 1980s, turbocharging was the norm in the world of motorsport. Porsche made the switch to forced induction in endurance racing in the mid-seventies with its 936 Group 5, open-top prototype, and the 911-derived 935 Group 4 car. Both proved extremely successful, helping the Germans dominate virtually every competition they entered.

In Formula 1, Renault was the first manufacturer to employ a turbo in the 1977 RS01. The car was extremely quick, but its engine had major reliability issues, so other teams were hesitant to follow suit. That changed in the first part of the 1980s when Ferrari and BMW decided to join the turbo craze. Powered by the new, Bavarian-built M12/13, Brabham’s Nelson Piquet finished the 1983 season on top, becoming the first person to win a Drivers’ title in a turbocharged Formula 1 car. From that point on, everyone began developing turbo engines, and the most spectacular, yet reckless era in the history of the sport began.

One particular team would end up dominating the decade. It wasn’t Brabham, but fellow Britons McLaren. They had won their last race in 1977, so by the fall of 1980, a major shake-up saw Ron Dennis taking charge of operations. He hired talented designer John Barnard who created a revolutionary carbon fiber chassis, but the McLaren cars powered by the aging, naturally-aspirated Cosworth DFV units were still too slow to pose any real threat to the turbo machines in the 1981 season. Dennis realized that his team needed a new engine but was unable to source one from the manufacturers already involved in Formula 1.

Inspired by Porsche’s dominance in endurance racing, he enquired if the company was interested in building an F1 powerplant. The Germans were willing to lend their expertise only if Dennis was able to provide the funding. As you might expect, developing a race engine from scratch was an extremely expensive affair and since Porsche was already on both road and track, pouring money into an entirely new project made no sense for the company.

Dennis reached out to Mansour Ojjeh, the CEO of Techniques D’Avant-Garde (TAG), a private holdings company that backed Williams at the time. Ojjeh was intrigued by the idea and promised to fund the project as long as the engine would don the TAG moniker. All sides eventually came to terms and development kicked off in 1982.

Porsche handed the task to a team led by famed engineer Hans Metzger who worked closely with McLaren designer John Barnard. They aimed to achieve perfection by building a motor that would be powerful, reliable, fuel-efficient, lightweight, and compact. To do that, an 80-degree V6 layout was chosen, even though Metzger initially wanted to start with a flat-six architecture.

Restricted by FIA regulations to 1.5 liters, the engine, dubbed TTE P01, was tiny, even by today’s standards. However, it was an engineering masterpiece thanks to the cutting-edge technologies it employed.

The twin turbochargers were supplied by German manufacturer Kühnle, Kopp & Kausch (KKK), who at the time proved it could develop more reliable units than their American rivals Garrett.

Furthermore, the innovative cooling system had a vast amount of cooling channels around the valve seats and other unconventional areas of the engine that significantly improved temperature management.

The fuel system was mechanically controlled in the early development stages, but by the time the first running prototype was built, a Bosch Monotronic system was fitted.

Although it was ready in December 1982, the TTE P01 saw its first Gran Prix action in the later rounds of the 1983 season. It weighed around 33.6 lbs (150 kg), could rev up to 11,500 rpm, and deliver close to 600 hp in race trim. While it was lighter than most engines in the competition, McLaren driver Niki Lauda argued that it wasn’t powerful enough to pose a real threat.

Porsche continued to develop the unit and by the start of the 1984 season, the boost pressure was improved from 2.5 bar (36.2 psi) to 3.2 bar (46.4 psi), which translated in around 750 to 800 hp in race configuration. Moreover, the Porsche motor was now fitted on the new MP4/2 chassis that was conceived around it.

With Alain Prost joining Lauda in the offseason, McLaren started 1984 with two consecutive wins. In the next 14 rounds, the team would go on to annihilate the competition by winning no less than ten races. They were crowned Constructors’ champions, while Lauda won his third and final Drivers’ title.

For 1985, both the chassis and the Porsche engine were revised. With around 50 extra horses and improved aerodynamics, McLaren was expected to dominate the season once again. Lauda and Prost only won five out of the 16 races, but they scored enough points to defend both titles. This time, it was the Frenchman who lifted the Drivers’ trophy.

The innovative V6 began to show its first signs of aging in 1986. Even though it received another boost bump which translated in close to 900 hp during races, Prost would only cross the finish line first on four occasions. With Lauda now retired, and his successor Keke Rosberg failing to secure a single podium finish, McLaren was dethroned by Williams in the final standings. Still, Prost earned enough points for his second title, after a dramatic win in the last race held in Australia. You can watch the highlights of the epic Grand Prix below.

The last dance for the Porsche engine was in 1987. Now in its most capable form, it could spit out 860 hp in race configuration and a whopping 1,060 hp in qualifying trim. It helped Prost win three races but was no match for Williams’ Honda RA167E V6. McLaren finished second overall, with almost half the points gathered by its British rivals, while Prost ended the season fourth, behind Nelson Piquet, Nigel Mansell, and his future teammate, the legendary Ayrton Senna. After switching to Honda power in 1988, the team would bounce back and go on another dominant run that ended in 1991.

While it wasn’t the most powerful motor of the original turbocharged era, the Porsche-built TAG TTE P01 was unquestionably one of the best. It proved that a turbo unit can be lightweight, fuel-efficient, and reliable, earning its place among Porsche’s most iconic race engines. 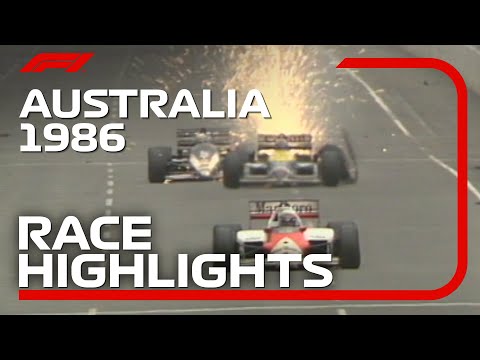