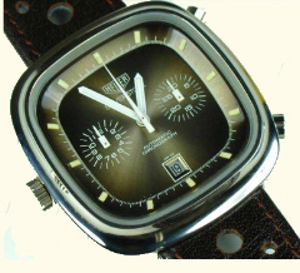 Swiss watchmaker TAG Heuer revealed its intentions of re-issuing one of its most coveted creations, the Silverstone Chronograph. The brand’s new version of the timepiece will become available in February 2010 with a rich blue or brown dial on a matching, perforated alligator strap, as a limited edition of 1,500 pieces per color. According to the manufacturer, it will retail for about $6,500.

The Heuer Silverstone chronograph was originally introduced back in 1974, emulating the curvature of the famous English racing track, hence the name, and with a design inspired by the distinctive square case of its predecessor, the Monaco.

“Before the Calibre 11, chronographs had to be constantly hand-wound to keep accurate time, and watchmakers placed the crown at 3 o'clock for easy accessibility. Because the development of the Calibre 11 freed TAG Heuer's designers from this constraint, Jack Heuer decided to place the crown of the Monaco and Silverstone at 9 o'clock,” a company statement reads.

The re-issue of the Silverstone is powered by an updated version of the Calibre 11 with Dubois-Depraz module.

The latest iteration of the Silverstone also celebrates TAG Heuer's history by featuring the brand's original Heuer logo, which is flanked on the dial by two silver counters at 3 and 9 o'clock. Stainless steel pushbuttons at 2 and 4 o'clock, a hand-applied date window at 6 o'clock and curved, sapphire crystal with double anti-reflective treatment complete the watch's look.