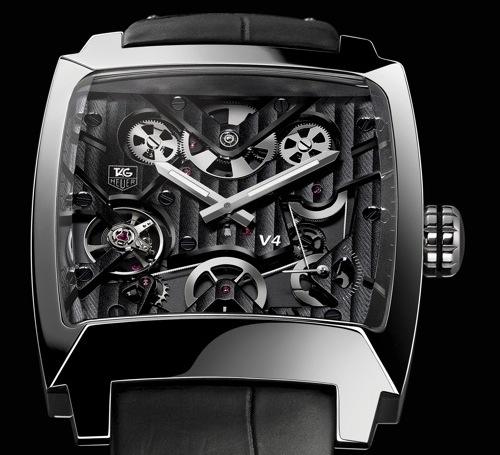 It's once again time for a watch-automotive icon encounter, as we’ve already gotten used to see two separate and usually unrelated industries go hand in hand. In TAG Heuer's case, the story goes a little different. The Swiss have developed a passion for high-speed and endurance racing, time after time releasing new watches to celebrate races around the world.

One more time, TAG pays homage to such an event, as they have released a new chronograph. The latest addition to the Tag Heuer Monaco V4 range of wristwatches is the limited edition Titanium model. This is the third member of the Monaco V4 series after the 2009 Platinum watch and the New Generation Rose Gold model from 2010.

The TAG Heuer Monaco V4 Titanium is, in fact, resembling the Rose Gold model, as both the models share the same 41mm “New Generation” V4 case. The titanium has been used for the case, hour markers, hands, crown and the folding buckle.

It comes with a mix of Ruthenium, Ceramic and Titanium, Calibre 11 reports. Taken separately, the Ceramic runs along the side of the watch, while the Ruthenium is used as the black coating on the ridged “dial” of the watch. Finally, Titanium (Grade T-5) is used for the hour markers, the hands (including the small second hand at 4 o’clock), the crown and the folding buckle.

The new Monaco V4 Titanium chronograph is scheduled to go on sale in a limited edition of just 200 units, in October 2011. That is some five months after the Rose Gold V4 starts being delivered to the stores. Pricing details are yet to be annoucned, but you should expect to sit at around USD120,000.