Faheem Rasheed Najm, better known by his stage name T-Pain, is a double Grammy award-winning rapper, singer, songwriter, record producer, and popular streamer. But, more importantly, he’s also an automotive aficionado with a passion for drifting. So, we’re not surprised that he asked Vaughn Gittin Jr.’s RTR Vehicles to build the perfect Mustang for him.
28 photos

With Gittin Jr. back from his fun times alongside Cleetus McFarland and all the attendees of his insane pool party, it’s time for some actual work at the RTR Vehicle headquarters. After all, Gittin Jr. is not only promoting his partners, but also his business.

And the company he runs just finished building a rather unique Ford Mustang. It’s a proper drift car with lots of bespoke mods but it’s still “streetable,” so it can be enjoyed both on and outside the racetrack. Because it was customized specifically for T-Pain, the car also comes with a few custom touches that don’t really have anything to do with going sideways, but probably mean the world for the artist.

Everything is showcased at the 2:30 mark, from the surprise on T-Pain's face to the excitement of his companions and the clear nice-guy engagement exhibited by Gittin Jr. while he explains all the quirks (there’s a special C-137 badge and a license plate that’s significant only for the customer) and features.

Anyone interested in knowing what makes T-Pain's new Mustang RTR such a great drift car will also get the pleasure of going through all the technical stuff from the 8:20 mark, a proper appetizer for the fun little delivery test up next. That one comes at the 14:49 mark in the video embedded below, and we can see both T-Pain and Gittin Jr. taking turns in hooning around the brand-new Mustang RTR in the company’s backyard.

A little advice from the drift master and the artist easily turns into a proper sideways racer, and of course in the end Vaughn doesn’t resist the temptation of ripping around in his own Mustang racer while giving T-Pain's crew a few joyrides (check them out in a cloud of smoke at the 19:49 mark). Nice car delivery. If only each one would be like this... 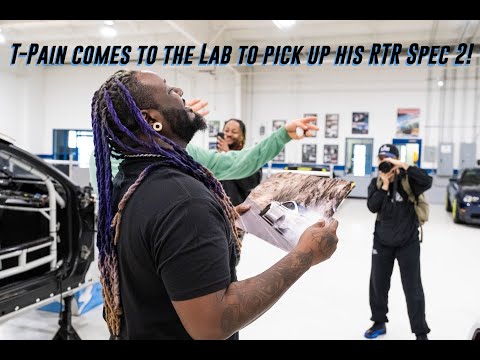