1 Formula Drift Is Back in Business This Weekend, Round 2 Is All Set for Atlanta

About 10 years ago, when I was dealing with sponsorship management for pro drifters and events, companies were still wary of the sport. I even heard some top-level managers saying that: "This is never going to become interesting, it's beneath us". And yet, a few years later, those same companies started using drifting in their commercial and communication. That has to mean something, right?

T-Pain Goes Drifting at the RTR Labs, It's Not His First Rodeo

What was once an underground phenomenon is quickly becoming more and more popular. As expected, people in the United States have been very receptive and the popularity of drifting has soared over the past decade or so.

The sport has managed to draw in more people -drivers, sponsors, fans - in Europe, Australia and Asia as well. If you think of it, it's still relatively young at less than two decades old outside of Japan. But the main promoters of the sport, including Formula Drift and its drivers, have done a great job at showing the world how cool it is to drive sideways.

Speaking of Formula Drift drivers that have had a strong impact on the sport, you can't help but think of Vaughn Gittin JR. Although he has decided to step down from his role as a pro driver this year, he is still heavily involved in the sport.

His ties to FD are still strong, as he is Team Leader at RTR Motorsports. While Chelsea Denofa and Adam LZ are doing all the competitive driving, Vaughn is in charge of running things in the background. And that also allows him to have fun drifting, outside of the high-pressure environment dictated by competitive driving.

Vaughn has been promoting the "Fun Haver" moniker for quite some time now, so it comes as no surprise that his latest endeavor has him hanging out with T-Pain at RTR Labs. If you're unsure what the connection between T-Pain and drifting is, then you should know that this isn't his first rodeo.

Some of the first videos depicting his drifting antics made their way online about three years ago. As soon as the drift community became aware that T-Pain was into drifting, several drivers decided to help him out.

T-Pain could be seen drifting the "Pickle Rick", LS-swapped Nissan S14, and then a four-door Infinity over at Hoonigan HQ. His "Getcha Roll On" video from early 2019 was an early sign of his interest in the sport.

And it seems that over the past few years he has developed a solid set of skills. The connection between him and Vaughn became obvious last year when he picked up his brand new Mustang RTR Spec 2. And in today's video, the rapper is back at RTR labs for a bit of sideways action.

Vaughn brought out three different Mustangs: the Fox Body, the Monster Energy RTR one, and a lower-spec S197. T-Pain gets to drive the S197 first, and after a few sessions in it, he jumps behind the wheel of the Fox Body. A bit of tutoring from a former FD champion goes a long way.

There are two important aspects that Vaughn points out after looking at his buddy's runs. When you're drifting, you should always be looking in the direction that you want to go in. You don't want to end up with point fixation and a crash now, do you?

Also, you should be smooth on the throttle. Being "choppy" with the right pedal, as Vaughn puts it, upsets the weight balance of the car. And that means you'll have to put in more effort with your steering inputs.

While he's not a pro, at least not yet, T-Pain is quite good at it. The fact that Vaughn even went out for a tsuiso (tandem battle) with him further supports that statement. Also, be sure to watch his reaction to the Ford F-150 Lightning about 10 minutes into the video. 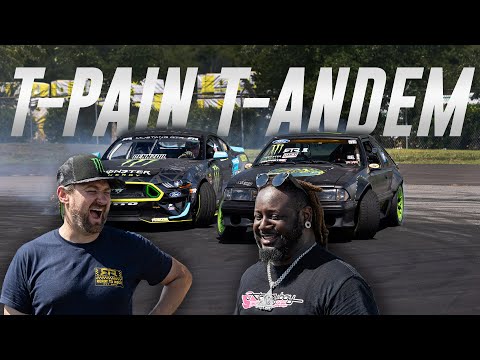 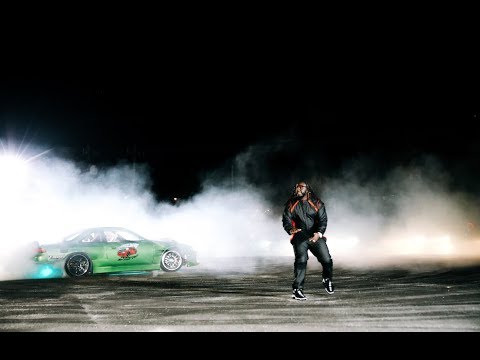