2 XAG Announces New Agricultural Drone Models for Next Year, Including Its First-Ever eVTOL

5 BAE Systems, Embraer to Explore Eve's eVTOL Potential in Military Applications
Up Next

Otilia Drăgan
eVTOLs (electric vertical take-off and landing) are gearing up to become serious competition for conventional helicopters, as the clean energy and advanced urban air mobility trends continue to rise. A Swiss eVTOL developer is ready to begin flight tests for its eight-seat aircraft that will be operating across Scandinavia.
8 photos

Dufour Aerospace has revealed the design of its tilt wing Aero3 eVTOL concept in the summer of 2021. The tilt-wing allows the Aero3 to fly as fast and as cost-effective as an airplane, while also being able to take-off and land vertically, like a helicopter, even in tight areas. It also combines electrically-driven propellers with hybrid propulsion (either conventional turbines or fuel cells) for an increased range.

The result is a piloted hybrid aircraft with six propellers across the main wing and two smaller ones on the tail, able to reach a cruising speed of 215 mph (350 kph) and a range of 630 miles (1,020 km), while carrying a payload of up to 1,650 pounds (750 kg). The Aero3’s full-scale prototype will be built this year and is expected to begin flight tests by the end of the year.

The Swiss company has already secured distribution for its innovative eight-seat eVTOL. An experienced Sweden-based helicopter distributor will be representing the Aero3 in Finland, Denmark, Sweden, Norway, and Iceland.

While the piloted Aero3 is meant to eventually operate as a passenger transport aircraft, it will initially be used as an alternative for helicopters in the Air Ambulance and Search and Rescue sectors. The reason behind it is that these types of missions don’t require additional new infrastructure, like future air taxis do.

Dufour hopes to begin operating the Aero3 by 2025, after it will be certified by the European Aviation Safety Agency (EASA). Until then, it’s gearing up to start producing the smaller unmaned version, called the Aero2, which conducted its first flight in 2021. 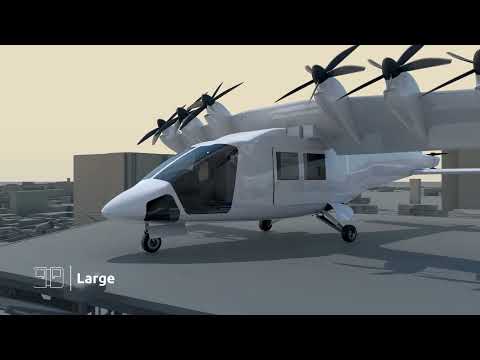