Swan Voyager VTOL Camera Drone Boasts a Flight Time of Up to One Hour, Can Record in 4K

Advertised as the first small, consumer-level, fixed-wing VTOL (vertical take-off and landing) camera drone with 3-axis gimbal stabilization, the Swan Voyager can help you take the most beautiful, high-resolution shots. Not just that, but it helps you get rid of flight time anxiety, boasting an impressive battery life.
7 photos

Created by the HEQ startup, which has been around since 2019, the Swan Voyager was designed for filming. It is a 2-in-1 copter and plane that offers two flight modes packed in the same drone. When it's in the multi-rotor mode, the aircraft flies just like your regular quadcopter. Switch it to fixed-wing mode and it will fly just like a plane.

With a user-friendly interface and one-click take-off and return functions, the Swan Voyager can be easily controlled even by the most inexperienced user within just three minutes. Its VTOL design allows it to take off from virtually any location without requiring special infrastructure such as a runway. Your Voyager can soar into the sky from a mountain, the seaside, the city, a cliff, and so on.

Since the Swan Voyager was engineered for videography, the drone is equipped with a 12 million pixel high-definition camera with 4K recording. It also offers 1080P real-time image transmission from up to 5 miles (8 km) away. The camera drone comes with customized HD FPV (first-person view) goggles that HEQ claims to deliver an immersive flight experience, bringing the sky in front of you.

Another notable feature of the Swan Voyager is the multi-player support, meaning you can connect with friends within a distance of 12.4 miles (20 km), share your location and part of the flight data.

In addition to being tech-packed, the drone also boasts an impressive flight time of up to one hour and a range of up to 28 miles (45 km).

This capable gizmo is now the subject of a Kickstarter campaign and a pledge of approximately $1,300 will get you your very own Swan Voyager. The estimated delivery date is November 2022. The video below will show you what it's capable of. 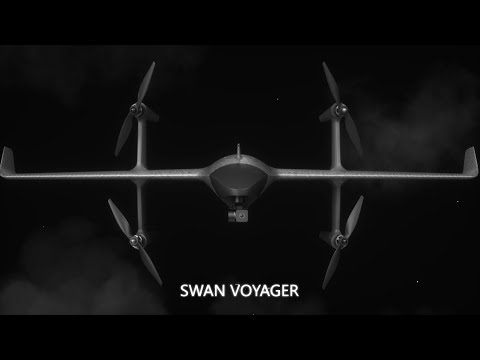