5 Terradyne Gurkha RPV Civilian Edition Is the Closest Thing to a Tank on the Road
Car video reviews:
Coverstory

The life of a car journalist can be very rewarding since you get to drive the kind of cars most people only dream of, without having to take any money out of your pocket.
9 photos

These highlights can include all sorts of supercars or even hypercars, or maybe you're the type that's more impressed by a very luxurious Rolls-Royce or Mercedes-Maybach. Whatever the case, they will all have to take the backseat for Ciro De Siena, the cars.co.za video host, after he got invited to drive this thing: the SVI Max 9.

No matter how fast, how expensive, or how exclusive some of the previous vehicles you've driven before were, they can't even hold a candle to this kind of experience. I know because despite having the keys to all sorts of powerful cars passing through my hands, it's still messing about on a field in an articulated hauler I have the fondest memories of.

The SVI Max 9 may not be as big or as heavy as one of those things, but it's equally as impressive, if not more. SVI is a South African company that, judging by the sudden influx of articles on its products, is probably doing a PR push at the moment.

We've seen what the SVI Max 3 was all about - an armed troop carrier with various configurations built on the chassis of a 70 Series Toyota Land Cruiser. Now, it's time to meet its bigger brother, the Max 9. It pretty much fulfills the same role as the Toyota-based model, only at a totally different level.

The Max 9 is surrounded by eight millimeters (0.31 inches) of Swedish steel, which is enough to stop the rounds of an assault rifle such as the AK-47. Did we say "stop"? We meant brush it aside like it's nothing, leaving not even a small indent on the vehicle's body. The only sign that something happened there is a bit of chipped paint.

Without any reference, the SVI Max 9 looks like a pretty ordinary all-terrain vehicle in terms of size. Have a person walk by it and they won't even have to bow their head to get under the side mirrors. The thing is massive, which is why climbing onboard means just that: you literally climb on a series of steps until you reach the comically short door.

The Max 9 can drive over pretty much anything, including mines. The clip doesn't demonstrate that, but the diesel-powered truck does go over a bed of decently sized chunky rocks like it was nothing. Oh, and it also drives through a concrete wall. Not to prove anything in particular, but just because it can, and it's fun.

SVI sells the Max 9 for roughly $400,000, but since we're not into the market for armored military vehicles, we can't tell whether that's fair or not. What we can tell you, though, is that if you want to tear down a concrete wall, you've now seen the most enjoyable way to do it.

Joking aside, this thing is as serious as it gets. It's designed to keep people alive in conflict areas, and we're pretty sure whoever will be driving it there won't think about how fun it is but how many miles are left until reaching a safe zone. Except with the SVI Max 9, you pretty much carry the safe zone with you. 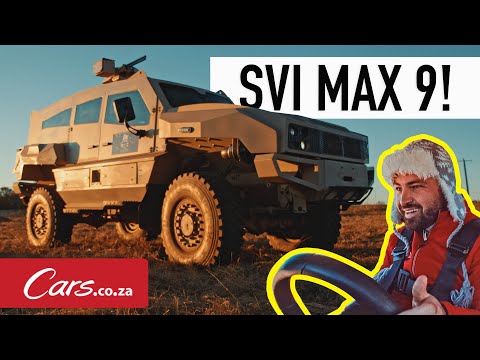