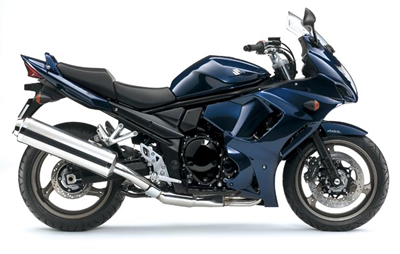 The battle of giants is about to take place later this month at the 2009 Tokyo Motor Show. After Honda detailed its two-wheeled lineup for the event last week, Suzuki has also geared up for the show and gave us a short glimpse of its goodies.

However, the highlight in Suzuki’s package is not a motorcycle.... but a scooter. And not just any scooter, but the Burgman Fuel-Cell, which features a 70MPa hydrogen tank, the highest-pressure tank used on a bike thus far.

The smaller brother of the Gladius SFV650, namely the highly anticipated Gladius 400 ABS will also be joining the Burgman. Named after the kind of sword used by gladiators in ancient Rome, the Gladius is a stylish naked bike with a 400 cc V-twin engine, that delivers plenty of power for the beginner riders’ segment that it aims to conquer.

Suzuki’s cruiser line will not be left aside and will send the Boulevard 400 to represent it. Powered by a narrow-angle (45 degrees), liquid-cooled 400 cc V-twin engine with fuel injection, the bike features inverted front forks and stylish cast wheels.

So far we have a scooter, a naked bike and a cruiser on their way to Tokyo. Just as expected, a touring bike is a must-have in any first class manufacturer’s lineup. Therefore, Suzuki will also bring the recently-revealed Bandit 1250F ABS bike.

Other two-wheelers to be showcased in Suzuki’s booth will be the GSV-R racebike, and several production models, including Gemma, Skywave 250 Type M, DR-Z50 and Love SNA26.