4 Half Car, Half Airplane: The Arrowbile Flying Car Was Master of Neither

Suzuki Joins the Flying Car Race, Will Develop an Innovative Two-Seater in Japan

Visitors at the 2021 CES (Consumer Electronics Show) in Las Vegas had the opportunity to take a closer look at the full-scale version of a pioneering Japanese eVTOL (electric vertical take-off and landing). SkyDrive, the air mobility startup that is developing what it calls flying cars, has now joined forces with a well-known name in the automotive industry.
11 photos

Suzuki has gained an international reputation due to its motorcycles, automobiles, and outboard motors. Now, it plans to literally reach to the skies by adding a fourth mobility branch – flying cars. To do so, it has partnered with SkyDrive, which also has big goals. The startup wants to kick off its air taxi service, a premiere in Japan, in just three years from now, coinciding with the 2025 World Exposition in Osaka, Japan.

SkyDrive made headlines with the SD-03, introduced as the world’s smallest eVTOL, measuring 4 x 4 x 2 meters (13 x 13 x 6.5 feet). This one-seater can reach 30 mph (50 kph) and a flight time of only ten minutes, but it was the first to successfully complete piloted flight testing in Japan. Also, the startup claims to be the first flying car developer in the country to have obtained a type certificate for its aircraft from the Ministry of Land, Infrastructure, Transport, and Tourism (MLIT).

But it didn’t stop there. SkyDrive is currently developing a two-seat compact flying car, the SD-XX. Equipped with eight propellers, this air vehicle boasts a longer flight time of up to 30 minutes, with a maximum speed of 62 mph (100 kph) and a maximum take-off weight of over 1,000 lb (500 kg). In terms of altitude, the SD-XX would be able to fly at 500 meters (1,640 feet).

The Japanese startup has plans for full-scale production for its two-seat flying car, in addition to the small SD-03 eVTOL. So far, it didn’t reveal too many details regarding its collaboration with Suzuki, other than the fact that they’ll work together on the technology and manufacturing of flying cars. Also, it seems that India will be the first international market where the two companies will promote the SkyDrive flying cars. 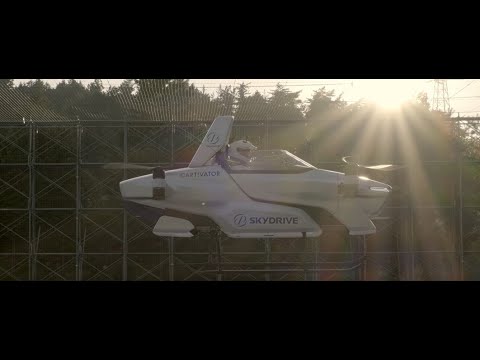