5 Lincoln Mark IX Steals the Digital Conti Revival Show With or Without Retro Wheels
Car video reviews:
Up Next

Got a Pickup Truck? Grab an Extended Stay Camper and Fulfill Your Need To Explore

While the Suzuki Jimny has an undeniable global cult following, the fourth-generation JB74W still has not graced America’s shores. And it is not because of the pesky emissions regulations but rather the brand’s untimely demise a decade ago.
18 photos

Suzuki cars have turned into a forbidden fruit for U.S.-based fans for a while, but it is easy to say they felt most of the impact some four years ago when the Japanese carmaker introduced the latest (and arguably greatest) Jimny pint-sized off-road-focused SUV. Since then, American enthusiasts probably smiled amiably and felt pity for their fellow Old Continent enthusiasts when they too lost the pocket-sized model on the altar of emission regulations.

Luckily for Europeans, Suzuki found a way to deliver a quick revival in the form of a commercially exclusive no-frills Jimny version that was exempted from the tightening rules. Well, now can we dare imagine what happened with fans across the Atlantic if they suddenly found out there was a way to have the Jimny back in America as well, if only virtually?

Frankly, if this was anything else rather than wishful thinking, Suzuki’s head honchos would be really narrow-minded not to try and bring back the brand to the United States. Alas, this is yet another digital project stemming from the prolific EV mind of the virtual artist better known as SRK Designs on social media, who has decided to further expand the appeal of the little SUV’s fourth generation with an EV version.

A battery-powered pocket SUV like an EV Suzuki Jimny would be perfect for America’s big gas price woes right now – as well as the swelling zero-emission model quotations, if our two cents on the matter may be allowed. But until someone with a corner office view thinks about this being a feasible course of action, let us enjoy the ICE to EV transformation in the pixel master’s latest behind-the-scenes making-of video (embedded below). 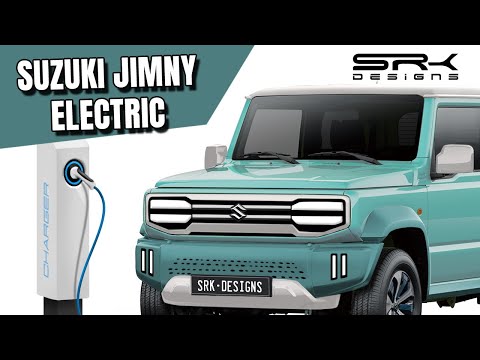